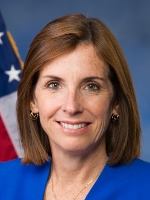 Up next in our series of Congressional Races is another Arizona race that is rated as a Leans Republican in the Cook Political Report. Arizona’s second Congressional District[1] is known for the tragic reason of the assassination attempt on Gabby Giffords that took place on 8 January 2011. After a year of attempting to recover, she resigned and a special election was held. The replacement race was won by Ron Barber who was another victim of the mass shooting. Ron won the first race in 2012 barely by 2,454 votes but then lost in 2014 by 161 votes. If anyone ever says your vote doesn’t count, it is races like these that prove them wrong.

So currently, incumbent Representative Martha McSally is considered a vulnerable candidate so she is part of the NRCC’s Patriots Program.

Martha McSally is a former fighter pilot and was apparently the first to be acknowledged having flown in combat. She was a Colonel in the Air Force and so is a bit on the militaristic side. She also has various degrees that she got from places like the liberal enclave of the US Air Force War College and (oddly enough) Harvard.) She serves mostly on armed forces committees and has been doing a ton of outreach in the district.

On the Democratic Side

On the Democratic side there are two candidates: former state representatives Victoria Steele and Matt Heinz.

Representative Steele is Native American (she is of the Seneca tribe) and she was a news anchor for years in the Tucson region. She was first elected to the State House in 2012 and won re-election in 2014. She has the backing of Raul Grijalva, who has served in a neighboring district for years. She has the support of most of the activists in the area but she hasn’t been able to do much fundraising.

Rep. Heinz is a medical doctor from the Tucson region. He has been able to do a lot more fundraising compared to Representative Steele, but from what I remember, the activists were not too happy with him running against Barber in 2012. I have met him a few times back when we all had hope (around the end of 2008) and he seemed like a decent enough person, if a little overeager at times. I do remember he fidgets more than I do and I am constantly fidgeting.

I may have met Representative Steele once, I don’t remember because I wasn’t going to many meetings for the longest time.

It is a difficult thing to say how this race will go. The DCCC is not really interested at the moment since it isn’t on the list of races that are being supported but if Steele wins, Emily’s List might come out for her. If Heinz wins, there might be solid LGBT support. Martha McSally is considered a strong contender because she is very visible in the district and has been making the right moves. (According to one source I consulted “she is everywhere.”) So it is likely that the district will stay Republican. But as I discussed last time, the mess at the top of the ticket can have an impact.

The thing about this is that you can have a razor thin margin at first and transform it later as Al Franken showed with his race. So as Martha McSally has been doing a lot of outreach, it won’t matter if the entire state goes blue for the Senate and president, it will keep her in Congress. Voters in that district are very used to having a lot of access to their congressional representatives and that is what matters overall.

[1] Giffords was actually the representative of the 8th district. These things change over time. It’s the same area.