Brian Beutler wrote a very good article on Monday, The Wackiest Donald Trump Conspiracy Theory Yet. But the headline (which I’m sure he didn’t write) is misleading. Rather than “wackiest” it should be “most predictable.” Republicans are now getting very excited about the idea that the media held back on Donald Trump during the primary, only to open up on him in the general election. The Liberal Media™ strikes again! Apparently, we are supposed to believe that Republicans don’t know how to do oppo research.

For those who don’t know, oppo research is what campaigns do to each other — looking for dirt. A great example of this is in Primary Colors where Libby and Henry head out to Florida to dig up dirt on Fred Picker. Also in that film is what I can only call reverse oppo research, where the campaign investigates its own candidate to know and prepare for anything that other candidates might dig up. I’m sure all modern campaigns do both of these things. I’m also sure that Trump’s campaign has not — or at least not much. That’s one of the most amazing thing about Trump: that he managed to dominate the primary without really having much of a campaign.

This conspiracy makes no sense, because so much of the dirt that reporters find is fed to them by campaigns. As Beutler noted, campaigns “have more resources, no daily print deadlines, and no need to worry about impartiality.” So if the media didn’t dig up enough dirt during the primary, the fault lies not with the media itself, but with Trump’s pathetic opponents. Regardless, why would the media start dumping on Trump now — before he’s locked up the nomination? It would make the most sense to wait until after California.

Of course, I don’t really see that there is any greater amount of scandal now than there was before. Trump is a scandal machine. What’s going on is that Republicans are looking for something to blame. None of the pundits who are pushing this conspiracy are so naive as to not know about oppo research. They are just pretending for the ignorant conservative masses who might be slowly realizing that they are on the verge of nominating a scandal plagued fool.

The real question is why is it that over a dozen major Republican presidential candidates had campaigns with oppo research that couldn’t dig up any dirt about Trump? Well, in part, that’s unfair; they did dig up dirt; it’s just that none of it stuck. But the bigger problem is that much of what Donald Trump has done that’s bad is not considered bad by Republican elites.

Trump contracted with undocumented workers? So what! He’s just being a Randian Übermensch. He was a “job creator”! So he seems to have sexually harassed every woman he worked around? Since when has the Republican Party thought that women should be anything but subordinate to powerful men? “Sit quietly while I talk about pubic hair on a Coke can!” That sums up Republican outreach to women. And the fact that his tax plan was fantastical didn’t matter when the rival Republican tax plans were only less fantastical in level. It’s like saying, “Those Harry Potter books are fantasy, but Lord of the Rings is…” What?! Fantasy written for slightly older people?

Democrats Can Do Oppo Research!

There is no doubt that the Clinton campaign has a small library of dirt on Trump. But why would any Democrat let fly with their best material until after the general election starts? As Beutler put it, “It isn’t the media that’s been strategically holding fire — it’s the Democrats.” Actually, as much as we hear that we don’t want to hurt candidates in the primary, the truth is that we do: because the other party certainly will release any damaging information once the general is on.

This is where the Democratic Party has a distinct advantage. Democratic policies are generally popular. So Democratic candidates don’t have to hold back on criticisms that would be effective. Republicans have to twist themselves into knots in order to attack each other. Of course, I’m not certain that it would have mattered. There is at least a third of the Republican Party that wants nothing more (And I mean that literally!) than a charismatic authoritarian. And now they’ve got one.

Primary Colors poster licensed under Fair use, via Wikipedia. 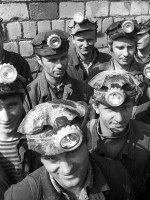 Matt Bruenig wrote a very interesting article recently, Demonizing, Not Engaging. In it, he highlighted an interesting inconsistency among liberal pundits. The African American community is overall quite homophobic. The white working class is overall quite racist. Yet liberals pundits have decided the best thing is to engage and find common ground with the African American community. They mostly want to demonize the white working class as hopeless racists. Why is this?

Bruenig presents one idea from Emmett Rensin: it’s all about who is likely to vote Democratic. African Americans are part of the Democratic coalition and the white working class is not. But this strikes me as question begging. If the liberal pundit class vilified the African American community, the Democratic Party would quickly see its coalition shrink by one. We are still left with the question of why it is that the pundit class finds it so easy to vilify the white working class.

I think the issue is quite simple: shared bigotry. Although I’m sure that liberal pundits are as racist as anyone else, explicit racism has been taboo long enough that there really is no liberal pundit who has to feel queasy about having made racist statements — or even have much of a memory thinking explicitly racist thoughts.

We on the left like to laugh at the fact that the Republican Party doesn’t do much to reach out to any non-white groups. But the truth is that the Democratic Party has the same problem — just with different groups.

But being in favor of same sex marriage is really quite a new thing. So even if a liberal pundit has long been in favor of equal rights for members of the LGBT community, they no doubt have many friends who have only recently seen the light. For example: their friends Barack Obama and Hillary Clinton. Thus, it just doesn’t seem as much a sin to be anti-gay as to be anti-black.

All of this is quite understandable. The reason I find it troublesome is that it is part of a broader tendency among pundits of all stripes to be nothing more than representatives of their classes. This is why the Democratic Party managed to degenerate into what was once considered a conservative economic stance. The Democratic Party’s main claim to liberalism is on social policy.

A great example of this is on MSNBC where economic liberalism is relegated to the sidelines. There’s Chris Hayes when he can sneak it into his show in his desperate attemp to keep his job. And there is “crazy uncle” Ed who seems about six decades out of touch with MSNBC‘s sense of itself: young, urbane, and The Economist reading!

We on the left like to laugh at the fact that the Republican Party doesn’t do much to reach out to any groups but the white working class, religious conservatives, and the affluent. But the truth is that the Democratic Party has the same problem — just with different groups. And it is reflected in the liberal pundits and all those involved in what Bruenig calls The Discourse. Clearly, there are those who push back against this — most notably Thomas Frank. Although in this election cycle, people like Frank seem particularly marginalized as any criticism of Hillary Clinton or the Democratic Party is seen as an attack on liberalism itself.

Liberals should try to make common cause with the white working class. I try, as I have written about a lot. It’s frustrating to see weeks of conversations go to waste because of one inflammatory Fox News segment. But it is worth doing. Note, however, that liberals don’t in general reach out to the black community on same sex marriage; they just accept. When it comes to the white working class, they just reject. And this just happens to align with the upper class sensibilities of the Democratic Party and its apologists.