The 1950s were a strange time. Last night, I watched the original 1956 version of Invasion of the Body Snatchers. I hadn’t seen it since I was a kid. It is a really good film. I’d have to say that it is better than the excellent 1978 remake. But it could have just been my mood. The action sequences work so well, and the music is dynamite. But while I watched it, all I could think was, “This is an allegory for communist infiltration into America.”

Now I know: everyone wants to say that it is about McCarthyism. And the filmmakers didn’t think they were making any kind of political statement at all. But it was in the air, just as fluoride is in the water to sap and impurify all of our precious bodily fluids. What’s more, McCarthyism wasn’t about losing our identity in the public mind. In fact McCarthyism was not all that popular. But the belief that the Soviet Union turned people into automatons was so universal that people didn’t even think about it.

Body Snatchers Is About Communism

At the beginning of Body Snatchers, Miles (Kevin McCarthy) and his nurse come upon a boy running away from his mother. The family owns a produce stand that is now shut down. The mother (who has been taken over) says, “We gave the stand up. Too much work!” Miles thinks it is odd and reflects on the “littered, closed-up” stand that had recently been the “cleanest and busiest stand on the road.” The word “cleanest” is telling, because of America’s long obsession with physical and spiritual purity. 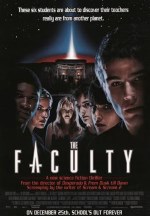 But the more concrete aspect of it is that everyone gives up their passion for work. They give up their passion for each other too. They are simply part of the collective and that is all that matters. Now I would say that this reflects on McCarthyism in the sense that reactionary movements are almost always mirror images of what they are against. I’ve marveled since I was a boy at how conservatives believe in certain rights as long as those rights are never used. So you have the “right” to denounce the NSA right up to the point where you do denounce the NSA. Lucky for us, the conservatives have not gotten their way on this issue (at least not directly).

Another “red scare” aspect of the film is the way that the pod people lack passion for anything except making more pod people. This was a common contradiction of the fear of communism: it turned everyone into brain-dead zombies, yet it was super clever when it came to disseminating propaganda and turning good Americans into fellow zombies.

The Faculty Is About Nothing

The Faculty is just silly fun. The film is just the good weirdos against the bad alien. It’s discussion of conformity is not political but cinematic. The monster is creating a collective because that’s what happened in Body Snatchers. It’s all just an excuse to entertain people who loved Invasion of the Body Snatchers and the remake of The Thing. But, as Aliya Whiteley noted at Den of Geek, it also has “a spoonful of The Breakfast Club.” I only disagree in that it would have to be an enormous spoon.

Body Snatchers is a great film. The Faculty isn’t; but it is the perfect film to to watch after Invasion of the Body Snatchers. 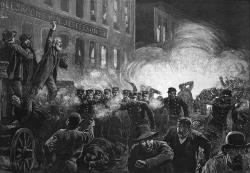 Today is International Workers’ Day, or in many places, just Labor Day. It was originally chosen to commemorate the Haymarket affair. It’s easy enough to get all of the history of labor organizing confused because it is all very repetitive. Workers try to get rights, businesses get the government to beat down the workers. It really is that simple. The primary purpose of the police and military is to keep the power elite in control by “controlling” the lower classes. If you see the police as being represented by the “Officer Friendly” nonsense, you’ve lived a charmed life — most likely because you are rich.

It is hard not to relate the Haymarket affair to what has been going on all around the country. Things really haven’t changed. Then as now, the media tended to ignore protests unless they got violent. Then as now, police and other kinds of brutality on behalf of the power elite were ignored. And, of course, the police were rarely held accountable. The day before Haymarket, the police began shooting into the striking workers — killing a couple of them. This led to the Haymarket demonstration when a group of anarchist threw a bomb that led to the deaths of seven police officers and an unclear number of workers. Typical that the number of civilian deaths is uncertain.

The direct result of the Haymarket affair is that four anarchists — none of them directly responsible, and probably not even indirectly — were put to death. Let’s be really clear here: they weren’t put to death because of the bombing. They were put to death as a cultural symbol — a message to uppity workers. The case against these men had nothing to do with the crime itself. The trial was all about what they had written in the past. Do we still believe free speech exists in the United States when it clashes with powerful interests? Sure, we allow Nazis to parade through Jewish neighborhoods. But businesses must be allowed to counter any union organizing with weeks of mandated propaganda. People’s feelings don’t matter. Businesses’ profits do.

The short term result of Haymarket was a huge backlash against the labor movement. And, of course, a groundswell of support for our brave men in uniform. You know: the ones who the day before Haymarket had shot indiscriminately into a crowd on peaceful strikers. Oh, and what were these terrible workers fighting for? A little thing called the 8 hour work day. At that time, people at the McCormick Harvesting Machine Company were working ten hours per day, six days per week. Do you get overtime if you work more than eight hours per day? Thank these workers and organizers, many of whom died in the fight.

Despite public opinion — and all those truth-telling journalists who just so happened to find the truth by supporting the power elite — the Haymarket affair stiffened the resolve of union supporters. It is all about solidarity. I have argued in the past that this is what capitalists most fear about unions. Any given benefit or workplace reform can later be destroyed — as long as the capitalists can divide and conquer the workers. And they’ve largely succeeded. About the only people I know who are big supporters of unions are those who are in unions. And even inside of some unions, such as grocery workers, there is now a double standard: older workers are well paid and younger workers have more or less minimum wage jobs.