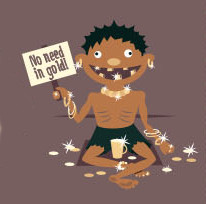 I want to show you the process of editing with an example I recently went through in getting an IG created. When the whole thing is posted, I will see about putting a link in here. But it doesn’t much matter. What does matter is that one small part of this very large infographic was about Mansa Musa, the great 14th century ruler of Mali. On his pilgrimage of Mecca, he spent so much gold that he caused its value to plummet and set off a years long depression in the Middle East. I often use this as an example to explain to gold bugs that inflation greatly effects gold based economies.

The artists that I work with appear to be from Asia: Russia, India, wherever. I don’t actually know because I don’t work with them directly. But they are brilliant. I am constantly amazed at their work, as you can see in the following infographic that I edited, How to Avoid Falling in Love with a Chatbot. And they came up with the graphic you see above to illustrate the issue of gold deflation: beggars could be covered in it but still need to beg. 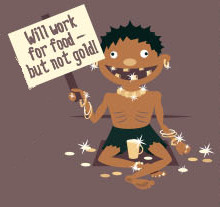 I responded to the image, “This is clever, but will be seen as racist in America. And the sign doesn’t make much sense. How about a larger sign that reads, ‘Will work for food — but not gold!'” The artist responded to my editing suggestion with the graphic on the left.

This is the kind of change you get when you are working with a professional. I wasn’t clear about what my problem was. But I asked for one specific thing and they gave it to me. And I like it. Of course I do! It was my idea! But I also think they rendered it perfectly. But I think it is clear to an American eye what’s wrong with this. It just will be seen differently here than it will be in most other areas of the globe.

So I responded, “This still bothers me. Either: no smiling (he’s a beggar after all) or a full set of shiny gold teeth.” Again, this is my mistake. I’m working with really professional, talented artists. And I’m a solid professional writer, but in the art of editing, I’m still learning. What I should have asked for was simply a lighter skin tone. I think that would have fixed it. 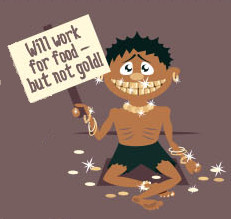 What I got back was just what I asked for. And I’m afraid that it made it worse. I really hate this situation, because I’ve found myself on the other side of it many times. People ask for changes but they are unclear or don’t even know what they want.

So I wrote back, “I understand he is supposed to be some guy from the Middle East. But he comes off as the ‘happy negro’ stereotype. I think it will be fine to make him not smile and not show any teeth. I don’t want to beat this one to death, but I think it’s important.” I think that was the breaking point with the artist. I still think that so much pain could have been avoided if I had just written, “Please make the beggar a lighter color.” But like I said, I’m still learning.

So the artist, realizing that they were working with an idiot client just changed graphic as you can see on the right. The inforgraphic lost what I thought was a nice joke. But this entirely new graphic is actually a better representation of what we are talking about. And it is beautifully rendered.

Clearly, I do a much better job when I’m editing writers. (I also edited the writing of this infographic — that’s where most of the time is taken.) But it shows just how hard the process is. It also speaks rather well for the company that I work for that it is willing to pay the artist and me to work out issues like this. A lot of companies just don’t care.

All images licensed under fair use. The truth is that I rather like the beggar idea and my little joke about working for food. The humor comes from the fact that no one with a “will work for food” is really willing to do that, but in this case they would be.

Last night, I watched a little bit of the MSNBC coverage of the then upcoming State of the Union address. And what I saw so upset me that I didn’t even watch the event. It was big news yesterday that Iran had captured ten US Navy crew members. So it was time to start demagoguing! And there was Steve Schmidt on “liberal” MSNBC going on (and on and on) about how the president needed to change his speech and talk tough about Iran and under no circumstance should the president tout the Iranian nuclear deal because Iran is bad, bad, bad.

Chris Matthews fired back. He’s not an artful guy, but what he said was basically correct: the Republicans just look for anything to complain about the president, that it was a bad faith criticism, and that Schmidt himself was doing that. Schmidt defended himself by noting that his wife was in the Navy and through a kind of “some of my best friends are military,” claimed that he didn’t just want war.

What exactly Steve Schmidt is doing on television is unclear to me. If he had been more successful, we would have President McCain, be at war with Iran right now, and have Sarah Palin embarrassing us all over the world.

As I recall, both Rachel Maddow and Chris Hayes made the argument that the whole thing was a diplomatic issue and maybe the president would be wrong to politicize it and might put these very service members in jeopardy. All I could think at the time was that this was going to be how it was. It didn’t matter that the president wanted to use the SotU address to call for collaboration, it was all going to be about conservative jerks like Steve Schmidt going around claiming that Obama is weak because he doesn’t rip off his shirt and pound his chest.

At the actual SotU address, Obama went on with his speech as planned. He told the assembled conservative whiners that we had a solid economy, and, “The United States of America is the most powerful nation on Earth.” And then after the speech, the press was filled with headlines like this one in The Washington Post, Iran Releases Captured US Navy Crew Members. And there was this in The New York Times, Iran’s Swift Release of US Sailors Hailed as a Sign of Warmer Relations. Oh! So contrary to Steven Schmidt, it’s actually things like the Iran nuclear deal and the fact that Obama believes in diplomacy that made this whole thing a non-issue, except for the conservative ranters who are only interested in finding fault with the president because he happens to be a Democrat.

What exactly Steve Schmidt is doing on television is unclear to me. If he had been more successful, we would have President McCain, be at war with Iran right now, and have Sarah Palin embarrassing us all over the world. Someone on Twitter last night said that he should be on Fox News, but I countered that. Say what you will about Fox News, at least the people on it are interesting. Steve Schmidt is on MSNBC because the network is desperate to have some kind of conservative who can breath through his nose to sort of counter Rachel Maddow. I hope Schmidt realizes just how much he benefits from affirmative action.

Steve Schmidt 2012 Shankbone by David Shankbone – Own work. Licensed under CC BY 3.0 via Commons. 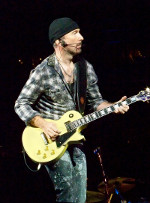 Today, we come to the guitarist I was most thinking of when I started the week talking about guitarists who were focused on sound: David Howell Evans — better known as The Edge of the band U2. I’m not a huge fan of the band or even of The Edge as a guitarist. But he is a great guitarist and he is an even greater sculptor of sound. I think of him as the Brian Eno of the guitar.

What we have here is a collection of featured guitar parts from him on eleven different U2 songs. As I’ve noted, I’m not at home, so I’m not going to the trouble of making sure the following list is correct. But of the songs I know, it is right:

It’s pretty amazing stuff. At the same time, it isn’t really my kind of stuff. I’m not that into sound. But I greatly admire it. And The Edge has been enormously influential. There are now two generations of guitarists who his thinking totally dominates. It’s pretty amazing, especially coming from such an unassuming fellow.

I just found this article, The Top 5: Overrated Guitarists. It contained this, “Most sensible critics see the iconic U2 guitarist for what he is: a great sonic pioneer who turned out to be the perfect receptacle for Brian Eno and Daniel Lanois’ sonic experimentation.” I had never really thought much about the guy, so I was pleased to hear that my take on him was actually widely shared.

The Edge 360 Tour Foxboro 2009 by xrayspx – originally posted to Flickr as The Edge. Licensed under CC BY-SA 2.0 via Commons. 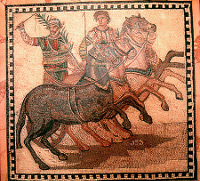 On this day in 532, the Nika riots occurred. Basically, it was a fight that broke out by different partisans in the big chariot races in Constantinople. Now these partisans were, among other things, political parties. And they were angry about the arrests, three days earlier, of members of the Blues and Greens for murders that had occurred at a previous chariot race.

During the chariot races on 13 January 532, the fans stopped chanting “blue” or “green” and started chanting, “Nika.” This more or less means “win.” The main thing is that the people had united in their anger against Emperor Justinian. But Justinian was no fool; he understood how to divide and conquer. He sent word and gold to the Blues, who abandoned the Greens, allowing the troops to come in and slaughter them. In the end, half the city was burned and 30,000 of the rioters were killed.

The Nika riots were clearly a political uprising, but the proximate cause was the chariot race. It does remind me of football hooligans. But it more reminds me of terrorism. I doubt anyone at the time thought it was really all about chariot races. Yet there are a whole lot of people around today who think that terrorism is all about Islam. In fact, I’m still stinging about an argument I had some time ago where I let off an Islamophobe because I didn’t want to offend someone whose work I had admired. Since then, he’s shown that he is quite clearly an Islamophobe. The distance between New Atheist and Islamophobe can be a hair’s breadth.

On a personal note: my parents were married 55 years ago today. But my mother died over a decade ago.

Winner of a Roman chariot race by Unknown – RomanChariotBig.jpg. Licensed under Public Domain via Commons.