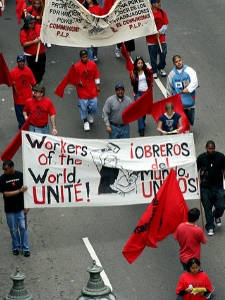 It seems I got in trouble on Twitter again. Elizabeth forwarded me a tweet from Eve Peyser (see below) about a contract job with Mic. And the ad was hilarious, as these things usually are. It claims that it is a part-time job that will last for four months. And what is expected of this part-time worker is amazing. The tweet highlighted, “Identify, assign, edit, and publish at least 10 articles per day.” But right below that it also noted that this person would write one to two articles per day. This is in addition to much else. It’s ridiculous.

Just the same, the tweet annoyed me. As I write this, it has 282 retweets. And all I could think was, “Do these people not know that this is what it is like to work in the modern ‘gig’ economy?” So I replied to the tweet, “What’s the big deal? Typical in my line of work. This is why most of the web is crap. You forgot to include the really poor pay.” I didn’t even think about it. Obviously! Whenever I think about it, I always decide not to reply. Twitter is a bad forum for me for so many reasons.

I exchanged a couple of tweets with Peyser, and she made the reasonable point that just because a practice is typical doesn’t mean we shouldn’t call it out when we see it. And I agree with that. If I did not also work in this very same field, I probably would have responded more enthusiastically. (Actually, depending on the pay, I’d take this gig. It actually sounds easier than what I’m doing now.) The truth is, I thought I was giving a thumbs up on the tweet with my ending, “You forgot to include the really poor pay.” But I now see how that could be taken as sarcastic.

But I don’t think that spreading the word is all that important. It reminds me a bit of Donald Trump and the jobs he “saved” at Carrier Corporation. Or consider Martin Shkreli. The price of Daraprim shot up and people grumbled. It did do some good: causing another company to enter the market. But what Shkreli did was only notable in how extreme it was. What he did is what capitalists do every day. And I do think there is a great concern about focusing on such individual acts.

As you regulars know, I’m a political radical. I no longer believe in capitalism — at least in the way it operates here in the US. So it isn’t surprising that my interest is in how we make systemic change. It’s shocking that people think that unless capitalists are allowed to charge rents, then no one will work because they can’t strike it big. How is it that people like me work so hard for relatively little pay and absolutely no hope of becoming rich? How is it that Mic knows it can find someone to do all the work it is asking for — probably for no more than I make?

But every time I bring up my concerns about capitalism, I get some variant on Jonathan Chait’s, Reminder: Liberalism Is Working, and Marxism Has Always Failed. Our society is so far gone that even among liberals it is considered outrageous to suggest that we wouldn’t turn into a Maoist dystopia if Bill Gates weren’t allowed to live in $63 million house.

Are Unions the Answer?

There was a time when unions seemed to be the answer. But what we have seen is that unions were powerful only as long as the capitalists allowed them to be. And the only reason the capitalists allowed them to be powerful was because they were afraid that there would be a revolution here. Once that ceased to be a concern, unions were brought to their current lowly position. Now they act as a kind of tool against further unionization. Most poor workers I know are simply resentful of those lucky enough to have a union job.

My point is that all we workers are going to have bind together and find a new system that works for everyone.

I know that any solution will have to be at the system level. It isn’t enough to help the writers and editors because the same issues we face are faced by taxi drivers and in-home healthcare providers and pretty much every other worker. And if it hasn’t affected you, just wait. Our system is broken.

And it isn’t just we poor workers who see things getting worse and worse. Over the last many decades, we have seen our total economic productivity increase at a slower and slower rate. A lot of this is due to the concentration of wealth. For capitalists to make money, they have to have people to buy their junk. I keep thinking of a line from The Sun Also Rises. When asked how he went bankrupt, Mike says, “Two ways: gradually and then suddenly.” Things could go wrong with our capitalist system very quickly.

Mic and all the other companies that expect our very souls in exchange for a lifestyle that is substantially below that of our parents are not the real cause of our problems. The cause is the system. For those who aren’t exactly clear what I’m talking about, I highly recommend Nicole Aschoff’s book, The New Prophets of Capital. You can read what I wrote about the book too, The Useless Messiahs of Reform Capitalism.

My point is that all of us workers are going to have to bind together and find a new system that works for everyone. We can and should shame Mic. But it is going to take so much more than that. I feel certain that Eve Peyser understands that as well as I do, even if she doesn’t necessarily agree with me on specifics. But this is the reason I should never say anything on Twitter. It just took me a thousand words to begin to say what I meant in my casual tweet.

Image cropped from Workers of the World, Unite! by Jim Winstead. Licensed under CC BY 2.0.

4 thoughts on “Workers of the World, Unite — On Twitter”