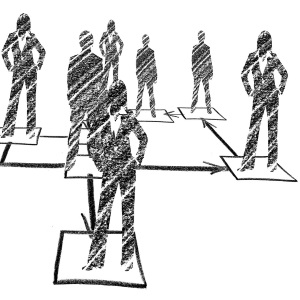 The video below is really good. However, I think he goes too easy on libertarians. Libertarians are authoritarians.

I know that there are (relatively) serious libertarians who don’t go along with this. There are, for example, a few libertarians who believe in labor unions and are against the totally anti-freedom “right to work” laws.

You can see the authoritarian tendencies of libertarians in the way they fetishize business-people and disregard workers. If the philosophy were really about freedom, it wouldn’t matter what people do. But it matters a great deal to libertarians.

What this all comes down to is their absolute allegiance to hierarchy (what the video is about). What distinguishes libertarians from conservatives and fascists is the means not the ends of their perfectly constructed hierarchy.

I think about this stuff a lot with regard to socialism. Socialism is a great system for someone like me who, because of my early environment, is highly self-actualized. I personally think that living under socialism causes people to be more self-actualized. But at least for now, most people need external forces to provide them with a sense of meaning.

It is not enough to just give someone money. People need to feel that there is a point to life — beyond a Schopenhauerian one. And I believe that meaning comes mostly from work.

But I mean work in a different sense than we think of as work in a capitalist context. Work is raising a family. Work is caring for a sick friend. It is creating a work of art that no one will ever see.

For conservatives, meaning comes from success in the hierarchy. This is an arbitrary construction. And not an edifying one.

Our mystics now have to operate in the context of a church that must trick people into giving money in the name of having a happy happy time after they die.

And it leads to absolutely ridiculous products that no one ever wanted and no one will ever need. Like GarfieldEats — your one-stop shop for pizzas shaped like a second-rate cartoon character.

Ultimately, what socialism needs is for people to stop thinking in terms of hierarchy. As we know from the transition from the Paleolithic to the Neolithic period, there is nothing natural about hierarchy.

Or rather, it is far more complex. There will always be someone widely considered the best musician; the best woodworker; the best gardener. The problem with capitalism is that it tries to force these innumerable hierarchies in any collection of humans into a single hierarchy.

Most people don’t care that they aren’t the fastest runner or whatever. They find meaning on their own terms — generally being the best human as they define it. This project is not helped by a society that fetishizes achievement in the art of accumulating more money than you could actually spend.

(It’s interesting that in the early 14th century, Dante presented greed as a particularly bad sin. Now greed is the highest good because of the “magic of the market” making us all better off. That was a major apologetic coup by the worshippers of capitalism — one most Christians gladly accept.)

And this is why I think socialism is key to human happiness. By valuing people in all their variety, we treat them as individuals. In capitalism, people are valued as cogs in the hierarchy.

This is why we see the absurd display of rich people being asked not just about things they know nothing of but about things that reflect on their position on the hierarchy. Ask David Koch about global warming! Probe Mark Zuckerberg about antitrust law! Ask anyone in the Walton family about anything at all!

The only difference between these exercises and the man-on-the-street interviews (which we no longer see) is that people think billionaires’ opinions mean something.

Society succeeds from the ground up. Capitalism teaches us the opposite: it is only because of the people at the top of our arbitrary hierarchy that we even manage to have enough food. Yet if stranded on an island, I would much rather be with my next-door neighbor than Bill Gates.

We must value people as people and not for where they happen to find themselves on the capitalist hierarchy. That is no different than valuing people on how well they play Red Dead Redemption 2.

Human Hierarchy by geralt. It is in the public domain.

8 thoughts on “Hierarchy in Capitalism and Socialism”