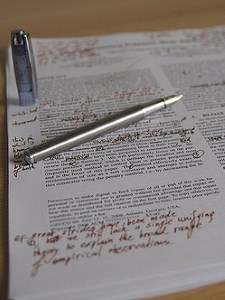 Not long ago, a client asked me to write a newsletter about something ghastly. It is the kind of work that I think of when I tell people that I’m a whore — that I’ll do anything for money. The client, who is a good writer himself (at least when it comes this this kind of soul-crushing, ad-copy, the only thing that matters is making a buck, writing). So when he got my final version, he changed it quite a lot. But given that he’s actually a nice guy, he apologized for it.

It wasn’t necessary. I’ve been writing professionally for coming up on 30 years. And there are a few things I’ve learned. One is that writing like this is about making money, not expressing myself. Another is that writing is a collaborative enterprise. Think of Finnegans Wake and Naked Lunch. Now you might think those were written by Joyce and Burroughs, but they were not. They were group efforts, that make quite a bit more sense because they weren’t left solely in the hands of their supposed authors.

Writing Is a Team Effort

I told my client that there was no reason to apologize. I understood that I was part of a team. And frankly, I did the hardest part: writing the first official version. It’s so much easier to take someone’s writing and improve it than it is to stare at a blank screen and come up with something new to say. But I understand why he apologized. Many writers would incorrectly think that what they wrote was thrown out and the whole thing was written from scratch. That almost never happens.

Writers too often think that they have a mean editor — people who take joy in destroying their great works of art. But editors are a writer’s best friend. Do a little experiment. Find a writer you really like. Then find them published in magazines and websites where you don’t normally read them. You will likely find that they seem rather different — in some cases like a completely different writer. This is the effect of a good editor.

There is a real mean editor. In my professional work, I just don’t have the time to be one. But I’ve been one in the past. I’m even one from time to time here at Frankly Curious. Such a mean editor really doesn’t care what the writer wrote — or even what the writer intended to write. What the writer created is used only create something that the editor feels they can use.

I ran into this some 15 years ago when a writer gave me an article for a popular website I was running. The article was totally unacceptable for the website. It was too simple for the audience. So I savaged it — totally rewrote it so that it was in a form where it fit. The writer was, to put it mildly, displeased. He demanded that I take it down. I understand now, but then I was flummoxed. I thought I had done him a major favor.

But now I think I was a mean editor. This was not, after all, a professional writer. And I was not paying. Just the same, I was offering him a huge audience that he could never have gotten otherwise. But I should have just sent the article back and explained why the article would not work and what I needed. Just the same, he did end up with an article that was far superior to what he wrote and he would have received a byline for what was mostly my work.

Helping Writers — Even When It Hurts

When dealing with professional writers, it’s much easier. No one pays for work that they can’t use. So if something is unacceptable, I just send it back. This is kind of mean, but writers seem never to see it that way. Sadly, “professional” writers don’t usually do much of a better job on their second try than they do their first. And that’s usually where I stop. I make a note that this is not a writer worth using in the future. And even if I have to make substantial changes to the work, few of these writers will think me a mean editor — because they can’t be bothered to read what gets published.

I do understand why my client apologized to me. At the same time, it was slightly offensive. He showed that he didn’t understand that I was a good and experienced a writer. I suppose he doesn’t want to be seen as a mean editor. And in a sense, he is. He could have sent it back to me and asked that I write it more in his style. But I now know his style and shouldn’t require much editing in the future.

But the truth is that all writers need a mean editor. The best editors help writers to develop their own mean editors — internal voices that tell them, “This sucks; let’s savage it; let’s start all over.” Otherwise, you’ll never be much more than a mediocre writer.

The mean editor: destroyer of the medicore writer.

Image cropped from Editing a Paper by Nic McPhee, licensed under CC BY-SA 2.0.

4 thoughts on “Confessions of a Mean Editor”