There is a specific term in rhetoric for what Rubio was doing in his extemp remarks tonight. It's called "Anaphora." Look it up.

There was a big dust-up following last weekends debate and then subsequently when Rubio was shown to repeat his own talking points again and again. Jonathan Chait had written at the time, Rubio Glitch Truthers Insist He’s a Poet, Not a Robot. That was following off John Podhoretz’s tweet above which introduced us all to the word “anaphora.” It is a fascinating word in that it means more or less the opposite thing depending upon whether you are using it in grammar or rhetoric.

In rhetoric, Merriam-Webster defines it is “repetition of a word or expression at the beginning of successive phrases, clauses, sentences, or verses especially for rhetorical or poetic effect.” People have referenced Martin Luther King’s “I Have a Dream” speak and the opening of A Tale of Two Cities. I’m more fond of this little bit from Richard III, because when spoken, it is virtually impossible not to come down really hard on each of those Is:

I, that am not shaped for sportive tricks,
Nor made to court an amorous looking-glass;
I, that am rudely stamped, and want love’s majesty
To strut before a wanton ambling nymph;
I, that am curtailed of this fair proportion,
Cheated of feature by dissembling nature…

Of course, as Chait noted, this is not the kind of thing that Rubio did. The defenses of him sounded to me very much like the defenses of Sarah Palin’s claim that Paul Revere was ringing bells during his midnight ride. It is a sad fact of life that politicians generally can’t just be allowed to admit to a mistake and move on. I’ve noted before that it would be nice if Sanders could just say, “We need to work on our healthcare plan.” Or simply that everyone would understand that is a workable starting point. But no, he is supposed to just pretend that there is no problem. 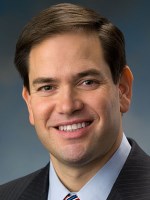 In grammer, anaphora is quite different, “use of a grammatical substitute (as a pronoun or a pro-verb) to refer to the denotation of a preceding word or group of words.” To give you an idea of this, consider the sentence, “I like it, and they like it.” That’s a repetitive and boring sentence. It would normally be written as, “I like it, as do they.” So in rhetoric, anaphora is the explicit use of repetition and in grammar it is the avoidance of it. Quite interesting, I think.

At this point, I would think that the Rubio campaign would prefer he use the grammar version of anaphora. If he’s been trying for rhetorical anaphora (and I don’t think he has), he’s been failing miserably.

2 thoughts on “The Contradictory Meanings of Anaphora”