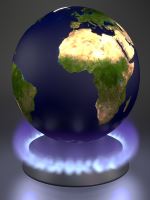 Not that facts matters, but The New York Times reported, 2015 Was Hottest Year in Historical Record, Scientists Say. Of course, as any actual scientist will tell you — even a lowly one like me who scrapes out a living filling the internet with crap — one year don’t mean a thing. Of course, in context, it’s in “Oh my God, we’re all going to die!” territory.

It reminds me back to last year, Seth Meyers Fails on Global Warming. You may remember that Ted Cruz was on Late Night With Seth Meyers. He claimed that there had been no global warming for the last 17 years. It’s a little strange, right? I mean, 17 years? Not 15 years or 20 years or even a dozen years. It’s too precise. And all it meant was that 17 years ago, we had a really hot year. Here’s the graph:

Of course, this is not how trends are calculated for temperatures or anything else. You don’t look at the first year and then the last year and then divide them by the numbers in between. That gives the first and last years all the weighting and absolutely nothing for all the years in between. It’s not valid scientifically. And Ted Cruz and everyone else who uses this trick knows it isn’t true. Look at the graph: is there any question but that there is an increasing trend?

What’s more, look at 1973. It was a hot year for that time. Let’s compare it to 1985 — the middle of three very cool years. Oh my God! Global cooling! Of course during that period there really wasn’t a trend either way. Let’s look out to 1992 — it’s basically the same temperature as 1973. No global warming! But you can see very clearly that there was a 0.5°F increase in global temperatures over that two decade period. And what about going from 1970 to 2015 — a 45 year period. Clearly, there is an enormous increase in temperature.

Scientists could use this kind of nonsense too. They could say that temperatures were increasing much faster from 1992 to 1998 by starting with a very cold year and ending with a very hot year. Of course, they don’t. This is because scientists aren’t in the business of deceiving people. They aren’t in the business of coming up with any old theory that will justify the Saudi royal family continuing to cling onto power and that the Koch brothers continuing to give political donations.

But now we have the hottest year on record. I can assure you that there will be years a decade or two out that will be colder than last year. And Ted Cruz and George Will and Charles Krauthammer (or their replacements) will make the same argument. “There has been no global warming since 2015 because last year was an unusually cold year.” This really annoys me because it means that there is literally no data that will change their minds. Now they will say that just one hot year doesn’t mean a thing. And they’ll be right! But then they’ll wait for one cold year and suddenly one year will be all that it will take to prove that global warming is a hoax.

My father is almost fanatical about global warming. But many years ago, after my mother had died, he was involved with this woman who was a Fox News addict and something of a conspiracy theorist. And I was having dinner with them and global warming came up. And they said, “You don’t believe in that, do you?!” And then something was said about Al Gore and I did not push the point. I’m not one to think much of my (or anyone else’s) PhD. But I was shocked that I could spend a decade of my life doing nothing but studying this stuff, and these two old farts thought they knew more than I did because someone on television told them it was so. Here’s a rule of thumb: a bunch of smart people can be totally wrong about something. But it’s a good idea to know why they think something and not just assume they are as ignorant as you are.

4 thoughts on “Global Warming and How Trends Work”