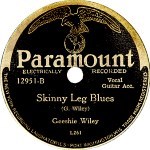 I’ve got to make this quick, but I’ll come back to it later this week. I first learned of Geeshie Wiley during a library performance by Eric & Suzy Thompson. At that performance, Suzy did her version of the Wiley tune, “Skinny Leg Blues.” But on an album, she did Geeshie Wiley’s best known tune, “Last Kind Word.” In fact, I use the introductory guitar part for the fade music of my videos.

Geeshie Wiley is more myth than woman. She seems to have been an itinerant musician, traveling around in the early 1930s with the other great female blues guitarist, Elvie Thomas. Thomas was about a generation older. She also seems to have kept Wiley in check. There are stories. For example, it is possible that Wiley killed her husband (probably in self defense).

In March of 1930, the two went into a recording studio in Wisconsin and recorded the two songs already mentioned along with two that Thomas sang: “Motherless Child Blues” and “Over to My House.” They returned a year later and recorded two more songs. I’ll discuss those when I get around to Thomas. I do tend to think that Thomas gets short shrift because there is less myth about her. We even have a picture of Elvie Thomas!

But to give you some idea of the legend of Geeshie Wiley, let’s listen to “Skinny Leg Blues.” I’m not absolutely sure what the lyrics of the song are. But as much as I can make out, it is one of the most violent songs I’ve ever heard. What’s so amazing is how calm she is about it. She lays it out: she’s little, but you should be afraid. If you see her coming, you shouldn’t run — that would be pointless. But you might want to pull down the shades so that you aren’t embarrassed when she cuts your throat. It’s an amazing song:

Image of record label based on a screen shot licensed under fair use, which I changed dramatically.