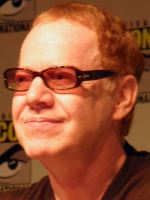 Cartoons often have great music to go along with them. Unfortunately for our purposes this week, most of them have vocals like the theme from The Jetsons. But one song I’ve always really liked is Danny Elfman’s theme for The Simpsons. It so reaches back to old cartoon themes. I don’t actually know if it is performed by a real band. It certainly sounds like it is, which is all that actually matters.

The song is written in the “acoustic scale.” Basically, it is just the major scale with an augmented fourth and a flatted seventh. It’s the augmented fourth on the third note of the melody that gives it that cool sound: C-E-F#. No one would expect that F# coming out of the gate. Of course, over time it is impossible to imagine any other note. Otherwise, it most reminds me of The Flintstones, even though melodically and harmonically they don’t share much. But they feel kind of the same.

Image cropped from “Danny Elfman 2” by The Kuhnster. Licensed under CC BY-SA 3.0 via Wikimedia Commons.