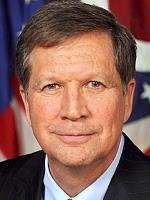 Martin Longman had the right reaction to last week’s Republican debate, Why We Can’t Have Sanity. It’s not about the crazies at the debate; it’s about the one guy there who seems to hearken back to the Republican Party when it wasn’t totally crazy: John Kasich. He did indeed come out of the gate strong with his (implicit) attack on Ben Carson with his absurd notion that a 10% tithe is all that we need to find the government. But as Longman pointed out, “There’s a bigger problem than the one that Kasich outlines. And that problem is that even Kasich is out of his fucking mind…”

The issue at hand is the “balanced budget amendment” that is so loved by the economically illiterate. The fundamental problem with it is that it is a recipe for making the business cycle even worse than it is. But people like the idea of it. In 2009, even Obama used this incredibly stupid analogy, “All across America, families are tightening their belts and making hard choices. Now, Washington must show that same sense of responsibility.” It’s a moral argument not an economic one. And it isn’t just wrong; it is evil. It does exactly the opposite of what should be done.

Paul Krugman puts the issue this way: my spending is your income. So in the macro-economy, my not spending money causes you to have less money to pay down your debts. This is the paradox of thrift. And it has only be understood since about the time that we’ve had economies. So consider what would have happened in 2009 if the government had indeed balanced its budget. That would have meant a huge reduction in spending because so many people were out of work that tax receipts were low. The reduction in spending would have thrown even more people out of work. This, of course, would have required that the government spend even less money, throwing more people out of work.

Conservatives and libertarians will claim that this is okay. The money that the government is not borrowing would be available to the private sector to borrow. In a depressed economy, the private sector does not want to invest. This is more or less the definition of a depressed economy. But you don’t have to think about it this way. Ever since 2009, the government has been able to borrow at incredibly low rates — often at lower rates than the inflation rate. (That right: investors were paying the government to hold on to their money!) Right now, the US government can borrow money for 30 years for just 2.86%.

What all this means is that the private sector is not borrowing money. If it were, then interest rates would go up. And because of the paradox of thrift, if the government cut its spending in a depressed economy, there would almost certainly be less private sector demand for money, and interest rates would go down even further. The only argument that conservatives have in this case is that the private sector would be so encouraged by what the government had done that they would have “confidence” and start spending. But this just doesn’t happen. Look at Europe over the last five years.

The other side of this is that when the economy was doing well, the government could spend more. Obviously, this is a recipe for disaster in terms of what things would be spent upon. Clearly, there are more needy people during a bust. During a boom, there isn’t. So what would the spending go to? I’m thinking ExxonMobile. Regardless, more government spending during a boom would just accelerate the boom and probably be inflationary.

So the balanced budget amendment would do exactly the opposite of what the government should do from an economic standpoint. But people like John Kasich push it because it sounds good. So he can come off as the reasonable candidate, even though, as Longman pointed out: “a constitutional amendment to compel Congress to pass a balanced budget is the stupidest goddamned idea in existence.” Of course, it is an idea that all the other Republicans are in favor of. And one that New Democrats like Bill Clinton also love. But this is an idea that the press will never counter because all the right kinds of people are for it.

4 thoughts on “Balanced Budget Amendment Would Increase Booms and Busts”