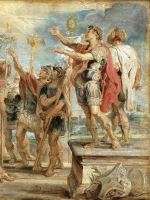 On this day in 312, Constantine had his Vision of the Cross. He was marching with his men to the Battle of the Milvian Bridge — which would lead to his total control of the Roman Empire. But before that, he looked up in the sun and saw a cross and the words, “Εν Τούτῳ Νίκα.” This roughly means, “Through this sign, conquer.” He didn’t know what it meant, but luckily Jesus came to him in a dream that night and explained it to him: follow me and you can dance on the ashen skulls of their enemies.

Now some people will say that this doesn’t seem very Christian — Prince of Peace, and all. But it shows how God used to work. You followed him and he destroyed your enemies, show you could dance on their ashen skulls. It’s kind of like Christmas: you believe in Santa and he brings you presents. How many kids would continue to believe in Santa Claus if he never delivered? Yet Christians watch as God disappoints over and over again, and to them, it is all the more proof that God is on their side. So in this case, God helped Constantine destroy Maxentius. Good for him! If God had ever done something like that for me, I’d convert too.

Of course, this was really when Christianity died. No religion ever survives this kind of power. As long as people have to choose a religion, it can still be vibrant (though it usually isn’t). But the moment that a religion is able to compel belief, it is nothing but an authoritarian dictatorship. That’s what Saint Constantine brought. Oh, and don’t forget: without his 100,000 troops, Constantine would have had his ashen skull danced upon.