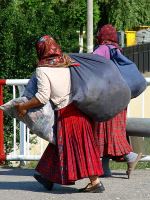 As I was looking for something to write about for today’s anniversary post, I came upon a mention of a massive one day murder of Gypsies at Auschwitz. I didn’t write about it, because it turned out that the date was wrong. It turned out that on 1 August 1944, the entire population of the “gypsy camp” was murdered — some 4,000 adults and children. It’s staggering to think about, although looking at some of the pictures of the victims, it was probably the most humane thing the camp personnel ever did to them.

I don’t bring this up to point out yet again just how awful the Nazis were. But after all these years, I find myself still trying to understand the Nazis. I don’t think the Germans are different than any other people. Certainly there are problems with its culture, but it isn’t any different in this way than any other culture. And I largely think that the vast majority of the German people were also victims of Nazism — even while they were culpable. So what makes people respond to a call for genocide with a shrug as they pick up a pitchfork?

Several years ago, I had a really uncomfortable experience. I was head of software development at this startup. And we had hired five Romanian programmers. They worked in Romanian, and I set up our system in such a way that they could work with the hardware remotely. I was totally against hiring them, but it was forced on me. Still, I found that it worked remarkably well. For one thing, the programmers were fantastic. But a couple of times we flew the Romanian team leader here to work directly with me.

“Do you think Americans wouldn’t think so lowly of Romania if it weren’t for the Gypsies?”

He was a brilliant young man — and very nice. You absolutely couldn’t ask for a better person to work with. But one day, he asked me the most peculiar question, “Do you think Americans wouldn’t think so lowly of Romania if it weren’t for the Gypsies?” I was shocked by this blatantly racist question. But despite how I appear online, in real life, I’m very much a placater. I might be different today, but then, I was not interested in finding out why this young man thought so lowly of this particular ethnic group. So I gently told him that the only thing any Americans were likely to know about Romania were Nadia Comăneci and Dracula. And that was the end of that conversation.

I assume that my Romanian colleague had about as much direct direct experience with the Gypsies as I did. Even at the time, I immediately thought of African Americans: an underclass deprived of opportunities and then shamed for their lack of success compared to the “white” class that is given every advantage. In fact, not long before that, I had had a conversation with some young immigrants to America who were asking me the same kinds of questions with regard to blacks. They are valid questions that deserved answers, and I think I did a decent job with them.

The problem we have is not with the questions, but with the assumptions that many if not most people have: those who are struggling in our society are simply worse people. The specifics of who “those people” are don’t matter. I’m sure that few Americans could tell the difference between Gypsies and the non-Gypsies in Romania. We humans create more or less random groups that we put great significance into. It is the source of our greatest strength in that it is what binds us together. But the dark side is that we become exclusive, and it really isn’t necessary; there are more than enough non-human things that might kill us.

In the end, I suppose I’m not that surprised that the Nazis happened. It’s more surprising that we don’t see more of it. But I do think that we are getting better; we are more inclusive than we have ever been. But looking around at America, it is clear that we have a very long way to go.

23 thoughts on “Romanian Gypsies and the the Secret to Nazism”