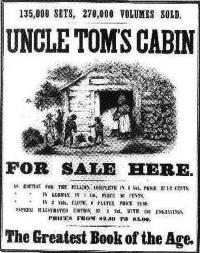 On this day in 1851, the first part of Harriet Beecher Stowe’s Uncle Tom’s Cabin was published in the abolitionist newspaper, National Era. Today, the novel has kind of a bad reputation because of the stereotype of an “Uncle Tom” — the “dutiful, long-suffering servant faithful to his white master.” But this and other stereotypes of African Americans are a reflection of the enormous influence that the novel had. It was an extremely important novel that galvanized northern thought against slavery.

What I never knew was the extremely negative reaction that the novel got in the south. In fact, it started a whole genre of novels called Anti-Tom literature. According to Wikipedia, during the ten years after the novel’s publication “between twenty and thirty anti-Tom books were published.” What’s shocking about these books is that Stowe actually went pretty lightly on the institution of slavery. Most of the slave owners are presented as decent people who are reluctant. There’s really only one slave owner who is clearly evil and I don’t think even he is indicative of just how bad slavery actually was.

I can understand why the African American community turned against the novel. And even today, no one mistakes it for good writing. But it does have to be seen in its historical context. Of course, there’s always a chicken and egg aspect to these kinds of things. Was the novel hugely successful because the north was finally done with slavery, or was it the novel that moved public opinion? I suspect that it was both. And that at least makes Uncle Tom’s Cabin a hugely important novel.