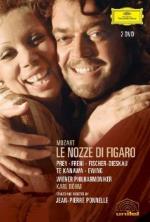 On this day in 1786, Mozart’s great opera Le Nozze di Figaro — “The Marriage of Figaro” — was first performed in Vienna. It was the first of the big three — the others being Don Giovanni and Die Zauberflöte — “The Magic Flute.” All three operas are still in the top ten of operas performed.

The opera is based upon a now largely forgotten play, La Folle Journée, ou Le Mariage de Figaro — “The Mad Day, or the Marriage of Figaro.” It is associated with the French Revolution because it is largely a denunciation of the aristocracy. At the end of the play, the title character gives an angry speech against the idea of hereditary rule. That was a big deal at the time. Now, of course, we don’t believe in it; we just quietly legislate it. But the opera was made non-political.

If you’ve seen the movie Amadeus, you probably have a very skewed view of both Mozart and Le Nozze di Figaro. The libretto was approved by the state before Mozart started working on it. And it was quite a success. I love the movie, but it is almost as much a distortion of Mozart’s life as it is of Salieri’s. In particular, Mozart’s financial fortunes were definitely improving — and had he lived, he would have been quite comfortable within just a couple of years. He also wasn’t childish and self-destructive — or at least any more so than any other artist at that time or this.

Le Nozze di Figaro is long — about three and a half hours when done in total. It usually isn’t done in total. Sometimes, it is savagely cut. But that isn’t necessarily a bad thing. Here is a 16 March 2013 performance that comes in at a respectable two hours and forty minutes. It is quite charming, and has a lively audience interaction. You can also check out the 1975 filmed version directed by Jean-Pierre Ponnelle. The music is especially good in it. But if you don’t know the opera well, there is this filmed stage production that is mostly notable because it has good subtitles: