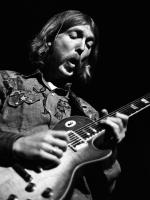 On this day in 1946, the great guitarist Duane Allman was born. I can’t think of anyone who plays rock even as good, much less better. Most people think Hendrix was better, but it is hard to see that. I think that is because of what Hendrix did regarding the sound of the guitar. In terms of what he played, it was mostly pretty standard blues. Allman was pushing the envelope of what rock guitar was. It was still mostly blues, but it was a whole lot more. It is sad that we missed out on his evolution. He died in a motorcycle accident when he was only 24 years old.

He worked as a session musician for years, where he had a profound influence — working with people like Boz Scaggs, Wilson Pickett, and Aretha Franklin. He is probably best known for his guitar work on Derek and the Dominos’ “Layla.” He’s the one who created the guitar riff, which is about the only thing people remember on the song. He and Clapton shared guitar on the song with countless overdubs. But all the slide guitar was Allman.

Allman teamed up with his younger brother Gregg and a number of other great musicians to form The Allman Brothers. The three albums they released while Duane was still alive are all classics. They are more standard blues rock, but this isn’t Savoy Brown — as good as they are. And live, they are really something special. I’m having some difficulty finding really good live video, so here is “Whipping Post” from 1970 at Fillmore East (not the concert their third album was drawn from):