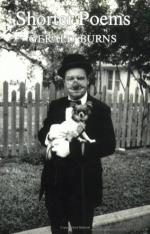 I used to be roommates with Gerald Burns — a well known poet and literary critic. Well, he was well known in the sense that any poet is well know. He was a great writer and I learned a lot from him. He also knew everyone. He was friends with people like Andrei Codrescu and enemies with far more. Poetry is like that. At that time, Burns was something of a big deal. He had won the National Poetry Series award in 1992, which is immortalized in a wonderful book, Shorter Poems. The poems were not what most people would consider short. It is just that they weren’t thousands of lines long the way they often were in such books as, Longer Poems.

The thing about Burns’ award was that it didn’t have all that much to do with the quality of his work. It was just that he had been writing long enough and was well enough connected that eventually, he found that one of his close friends was sitting on the judging committee of a major poetry award. And they picked Burns. It had to be like that. His poetry was extremely dense and ostentatiously intellectual. Most people thought reading him was like chewing gravel. But among those who got it, his work was brilliant and even charming.

I was reminded of this on Sunday when I read Thomas Frank’s newest article, Genius Grant or TED Talk: Does a MacArthur Grant Make a Genius Smarter? It is about how awards lead to awards. The MacArthur Fellowship may have started out as a way to give out awards to deserving unknowns, but like all awards, it quickly became just a way to polish its brand. How do we know that a MacArthur Fellow is brilliant? Because he has been given lots of awards by other organizations. Unlike his best work, Frank kind of rambles in the article, but you get the point.

Let me be more blunt. Awards like the MacArthur Fellowship are part of our problem with inequality. Society decides that this or that genius is the genius. I own a number of recent English translations of Don Quixote. Not one of them is distinctly better than another. That is because they are all shockingly great in their own way. But the award business is about picking one as though he is preeminent. So Edith Grossman becomes a millionaire and John Rutherford just remains a fellow at The Queen’s College, Oxford. There’s nothing wrong with that, but the awards make distinctions where none exist. And giving money to a single creative worker is probably a bad use of resources. (For the record, Edith Grossman has not won a MacArthur fellowship; I’m just making a point.)

Of course, this isn’t all about branding. It’s also about laziness. It is a hell of a lot easier to look around and see what people other groups are celebrating than to go out and look for new or unknown talent. For example, how would anyone even know about a modern day Emily Dickinson? What’s more, an unknown artist might embarrass a foundation by turning out to be someone who isn’t right thinking as defined by the kind of people who give out these awards — you know, the TED Talk crowd. These are people who thought Nick Hanauer was “partisan” because he didn’t think rich people were “job creators” and thought that Sarah Silverman was unacceptable because she performed her act at TED the same way she has for decades. You know: upper class douchebags.

As for Gerald, I suspect there were more awards in his future. He had broken through and his work was so difficult that even if people didn’t read it, they would have gone on respecting it. But only a few years later, Gerald died quite suddenly, under the most tragic of circumstances. But his award lives on. And all the awards live on. Because ultimately, that’s what they are for: themselves.

2 thoughts on “The Self-Perpetuation of Awards”