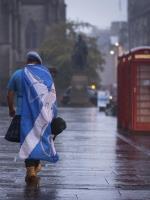 As I’ve been clear: I never thought that Scotland would vote to leave the United Kingdom. And I’ve had my problems with the idea. In particular, I think they should have dealt with the monetary issue facing them. They needed to set up their own currency. All they had to do was talk to some people in Spain. Or Italy. Or Ireland, for God’s sake! But overall, I was in favor of Scotland leaving the UK.

It reminds me of a bit from the film 1776 when Benjamin Franklin is arguing with John Dickinson, “We’ve spawned a new race here, Mr. Dikinson. Rougher, simpler; more violent, more enterprising; less refined. We’re a new nationality. We require a new nation.” That doesn’t perfectly apply to Scotland, but I do think it ought to be its own nation. It isn’t Northern England. It is a distinct group of people and to paraphrase Dr Franklin, “It deserves to be a new nation.”

Most liberals were pretty positive toward Scottish independence. But I find it a bit bothersome that some of my liberal friends are thrilled that Scotland is staying in the United Kingdom. As liberals, we should all know that other than the United States, the UK is the most conservative and therefore messed up country among the advanced economies. It is always one step behind us in stepping on the little guy with powerful and innovated new tools. The Scots are a more liberal people. And not only would it be nice to have another liberal country, the break with the UK would probably have pushed England a bit toward the left itself.

Zack Beauchamp has done great coverage of the Scotland vote for Vox over the past month, and yesterday he provided another interesting article, The Scottish Vote Was a Class War and the Rich Won. It is based upon some preliminary research by Susan Johnston. And she found a shockingly clear correlation between support for staying in the UK and disposable income of the voter. I’ve greatly altered the original graph, which actually makes the correlation look even stronger:

There is only thing that bugs me about this graph. This could just be showing an age divide. In general, older people are more wealthy than younger people. But based upon polls before the election, I think we will find that even taking this into account, the Scottish independence vote was very much a class vote. And look at this “10 Reasons for Scottish Independence.” It looks like the Scottish version of Occupy Wall Street:

I especially like the last one, “A fairer society that cares for all its people, not just the rich.” Again, now may not be the time for Scottish independence. I would like the whole issue to be taken more seriously because I don’t want the Scottish people to be hurt. But there is no cause for triumphalism about this vote. It is a mixed bag. But as an American liberal, I stand far more with Scotland than I do the United Kingdom or even Ireland.

But all liberals really ought to think hard about celebrating the continued taxation of Scotland for the purpose of supporting one of the largest and most aggressive militaries in the world. It is terrible that a liberal people are forced to support a government that even when nominally liberal gets anemic leaders like Gordon Brown or war criminals like Tony Blair. And otherwise, they get corporate stooges like David Cameron.

So maybe it is for the best that Scotland remain in the United Kingdom. I’m certainly open to that argument. But this is no time for celebration. The vote against independence is what the rich wanted. If it happens to be the right thing, that’s just a coincidence. The rich get what they want. That’s true here in the United States. And it is sadly also true in Scotland.

7 thoughts on “The Rich Win Again, This Time in Scotland”