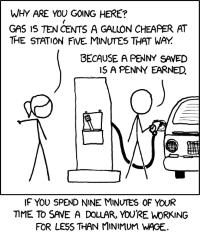 As you should know by now, you should be reading Jonathan Cohn every day. And yesterday was no exception. He wrote, Is Obamacare Making Insurance Cheaper in Your City? It is primarily concerned with the new Kaiser Family Foundation study that I wrote about yesterday morning, Good News About Obamacare Doesn’t Get Out. But Cohn went into a bit more depth about the issue, as he usually does.

I was very struck by the end of the article where he talks about how the lower premiums will be distributed. He provided the example of Los Angeles where the decrease in premium is due to lower prices offered by Anthem. So if people have Blue Shield right now and decide to just keep it next year, they may end up paying more. Cohn commented, “It’s confusing, I know. And you can safely assume that not all consumers are going to understand this. It’s going to cause real problems come open enrollment time, particularly since some people will choose to re-enroll in their current plans automatically.” Indeed it is confusing.

This is one of the many problems with neoliberal policy. There is this idea that people have nothing better to do with their time but to look at all the options for health insurance each year and decide which one is best. To conservatives, this is called, “Freedom!” But it doesn’t feel much like freedom to the average American who is already busy making ends meet. It reminds me of the lines at the grocery store. I think most people would prefer a single queue where they know they would be treated fairly rather than the current system where the most obnoxious people dash to the next check-stand that opens.

What’s more, the economics of neoliberal policies are never fully worked out. These policies normally have huge opportunity costs. But they are ignored because it is a cost that is far greater on the poor (with little political power) than it is on the rich (with much political power). I know that we consistently get saddled with neoliberal policies because we are told that they are the only ones that are politically viable. But the reason they are politically viable is because they benefit the rich, and the country is run by and for the rich.

I’m glad that Obamacare is working out well. There is no doubt that it is far superior to the system we had before. But it is still suboptimal. We continue to use “free” markets to provide services, even in cases where those exact markets were a total failure. Look at the way that those in the so called Education Reform movement are so eager to destroy the public school system because they claim it is broken. If only these people applied the same thinking toward the healthcare system. But of course, the two are exactly opposite. Destroying public schools is seen as in the interests of the rich, and protecting our byzantine private insurance system is seen as in the interests of the rich.

You can predict government policy with a simple procedure. Does it benefit the rich? If so, it is the mainstream policy. If not, it is out of the question — not even worth discussing — “commie talk.” Are you enjoying your oligarchy?