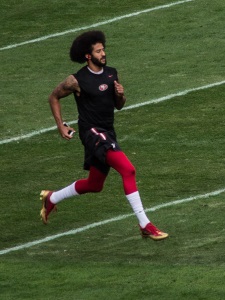 Last week, Colin Kaepernick and the NFL agreed to a deal over Kaepernick’s lawsuit about the league’s conspiracy to not hire him. For those who do not know, he is the former San Francisco 49er quarterback who nealed during the national anthem to protest racist policing policy toward blacks in the United States. Regardless of what happened, this was a great example of what a myth “freedom” is to those on the right.

Before I get to that, I want to note a few things. While I’m happy for Kaepernick, I am sad about the situation. I would have rather seen the NFL be dragged through the mud on this. But had that happened, the result would almost certainly have been that the NFL won the case. This is because the standard for proving conspiracy is ridiculously high. And even with all the bad publicity, the NFL would surely have used the court win to clean up any damage that had been done to their reputation.

According to libertarian dogma, only the government can oppress you. Only the government can put you in a cage, they say. Yet this is a delusional belief if you look at how society actually functions. People do not have a choice to not work. And since employers enjoy a monopsony, people don’t get to choose who they work for. And they certainly don’t have the right they did 10,000 years ago to go out and hunt and gather.

So the idea that Colin Kaepernick didn’t have his rights infringed upon is just nonsense. But don’t get me wrong: I understand that the NFL owners saw this as simply an economic issue. They were afraid that there would be fewer fans watching games if such a divisive person played. But that doesn’t mean they were right. As Les Carpenter noted, the NFL continues to rake in money.

The question is: should it matter? In this country, we just assume that if the market pushes in a certain direction, that is the direction we should go. But the truth is: there is quite a good demand for whites-only restaurants. Forget the ridiculous libertarian apologetics that “racism is bad for business.” There are plenty of people who are proud of their racism. Just look who’s president!

Should it matter that a good economic decision means making a bad moral decision? I think it should. It means that we are taxing morality. We are saying, “Standing up for what you believe in will cost you your livelihood.” Rather than be guided by what the market dictates (as though it were our god) we should fix the economy where it encourages immortality.

Colin Kaepernick was not free. And he was not free because of the “free market.” He isn’t alone. Most of us have to work jobs we aren’t keen on. We’d rather have actual freedom to do what we want. And I’m certain if that happened, we’d have a society that is just as rich and far less exploitative as the one we now have.

You don’t have to agree with me, of course. But the least we can do is stop pretending that the capitalist system provides us with real freedom. It just provides us with an unaccountable system of control. And I do not accept theoretical “freedom” as a replacement for actual freedom.

Colin Kaepernick Is a Hero

There are some who claim that Colin Kaepernick is not a hero because he doesn’t vote. Let me just say that democracy is not the same as voting. Plenty of countries have voting without democracy. Kaepernick did far more for the cause of democracy than I will with my lifetime of voting. Police mistreatment of blacks, voter disenfranchisement, and Donald Trump are all part of the same thing. I have faith that things will get better and Colin Kaepernick is a big part of that process. Thank you Colin Kaepernick!

Image cropped from Kaepernick by tom. Licensed under CC BY-SA 2.0.