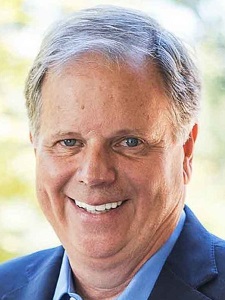 Right now, Roy Moore and Doug Jones are deadlocked in the Alabama Senate race. In one way, this is really good: a Democrat might actually become Alabama’s junior Senator. But in another, it’s awful. Roy Moore is clearly guilty of having sexual relationships with high school girls while he was in his 30s, yet most Republicans could not possibly care less.

I ask my fellow countrymen in Alabama, “Are you going to allow this?

Now don’t get me wrong. I don’t too much care about the personal lives of politicians. And although I think even flirting with a 14-year-old girl unconscionable, it certainly isn’t something like raping a six-year-old. But even though I’m not even that outraged about hypocrisy, this case is different. This is a man who would never justify such behavior on a defendant who came before him.

I don’t much mind hypocrisy coming from people who show mercy. But Roy Moore shows no mercy. His reading of the Bible makes it a vile document. And I understand, any long religious document like the Bible can be used to say whatever you want. But what you make it say says a whole lot about you. And what it says about Roy Moore is that he is a vile man who should never be given any power.

The Attacks on Doug Jones

It’s been funny to hear the attacks on Doug Jones because we’ve heard these same things so many times before. I especially like this, “He’s weak on crime!” Donald Trump said this. Of course, Donald Trump is the man who still thinks the Central Park Five should have been put to death despite the unquestioned evidence that they are innocent. So for Trump, like most Republicans, being “tough on crime” really just means locking up and killing dark-skinned people.

The thing is, Doug Jones used to be a prosecutor. He was the United States Attorney for the Northern District of Alabama. But he prosecuted the Ku Klux Klan members, so I guess that doesn’t count. The Republican Party does almost nothing but harm its base. Just look at the new tax bill. The one thing that the Republican Party does do — and the only reason it has a base — is because it is racist and it tells its base in every way that it is perfectly fine to be racists.

Locking Up the Wrong People

Interestingly, The Daily Beast reported, Doug Jones Locked Up Men Who Did What Women Say Roy Moore Did. But again, none of this matters because the Republicans don’t believe in equal protection. They believe in the kind of government where their allies get to do anything they want while all others are robbed, locked-up, and killed. When listening to Republicans, you have to bear in mind that words mean different things to them. The way almost everyone defines “weak on crime” indicates that Doug Jones is strong on crime. To Republican elites, it’s only people like Neshoba County Sheriff Lawrence A Rainey who are strong on crime.

Of course, Doug Jones is also accused of wanting to raise taxes. He doesn’t. But this is a very funny criticism coming from a political party that just raised taxes on the poor and middle classes and took healthcare away from 13 million people, all in the name of enriching the already rich.

But most of all, they attack Doug Jones for not being a Republican. He will vote with the Democrats. Well, I guess they’ve got that right. What a horrible thing that would be! To trick the people of Alabama into voting for someone who will actually look out for their interests! The horror!

Where Doug Jones Stands on the Issues

Doug Jones is, literally in a word, a Democrat. He’s pro-choice, but like all other Democrats, it isn’t because he wants to see more abortions. As Anna Almendrala wrote earlier this year, We Already Know How To Safely Reduce Abortions. “Hint: It has nothing to do with restricting access.” If those anti-choice people really want to reduce abortions, they wouldn’t be restricting access to abortion; they’d be increasing access to sex education and birth control — two things they are also against. Regardless, Doug Jones is no radical on this issue. Like most Democrats, he’s just a pragmatist who wants to decrease abortion in the ways that actually work.

When it comes to immigration and the environment, Doug Jones does disagree with a lot of Republicans. But he’s hardly an extremist. And I think that Republicans really need to ask themselves, “How much longer am I going to vote on issues that have no relevance to my life and ignore the issues that do?”

Doug Jones Is No Extremist

The bottom line regarding Doug Jones is that he is no extremist. He’s a politician who will legislate in a way that he thinks will be best for most of the people of Alabama. You can’t say that about Roy Moore or almost any Republican on the national level. Look at the new tax bill: almost every Republican voted to raise taxes on the poor and middle class, and to increase the national debt, just so that they could give more money to the rich.

The fact that Roy Moore is a pedophile is probably enough of a reason not to vote for him. But I think an even bigger reason is that Roy Moore will not do what he thinks is best for the people of Alabama. He will vote for what he thinks is best for his super-rich donors. And if that means allowing children to unnecessarily die from disease so that the Billionaire Class can have even more money, he will do it. And that is even worse than what he was doing to high school girls when he was a 30-something district attorney.

Vote for Doug Jones. See what it’s like to have someone in the Senate who is actually looking out for the interests of the people of Alabama.