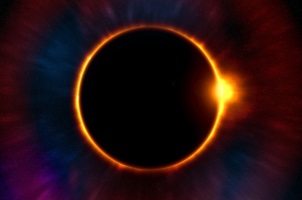 Where I live in California, the solar eclipse was supposed to start at roughly 9:00 am. It reaches maximum occultation at 10:20 am. And then it ends at roughly 11:40 am. As I write this, it is 10:00 am, and my world is shrouded in clouds.

I got prepared for the event over the last week. I’ve got a set of welder’s glasses. You are supposed to use shade 12 or higher. I’ve got a double-12 set-up. What’s more, my father drilled a circular hole in a board so we could see the shadow of the eclipse as it makes its way across the sky. It would have been fun.

When I was in college, I was friends with a number of people who were into astronomy. So I often found myself freezing in the middle of the night while we tried to see this or that. But what’s happening today is pretty typical of those trips. The weather does not cooperate.

Eventually, the fog will burn off. But it is going slow. As we approach full occultation, I can tell that it is much darker than it normally is. In fact, it’s about as dark as it is at 6:30 am. But this is not a lot to get excited about.

If you want to study astronomy, you really need to take a trip to a nice desert somewhere. The truth is that I live in a rotten area for astronomy. But this must also be some corollary of Murphy’s Law: the cloud cover where you are will be directly proportional to your excitement regarding an astronomical event.

At 4:00 pm, I took a walk down to the supermarket. As I came out at 4:30, the cloud cover had just broken up so that I could see the sun to some extent. So only five hours late!

The next time there is an eclipse, I’m going to head for the desert!

Image is in the public domain.