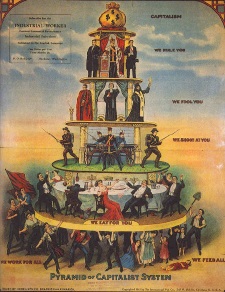 I just read an interview over at PorMarket, The Exercise of Market Power Probably Contributes to Economy-Wide Inequality. It’s with Jonathan B Baker and discusses how effectively having a monopoly tends to increase inequality. If this sounds a little obvious, well, that’s because it is. This is why monopolies are technically illegal. But the issue really isn’t specific market failures. The issue is (or should be) capitalism itself.

The first question starts, “The discourse on concentration, market power, and bigness in many US industries has increased dramatically in the last year.” Really?! Like so many things that economists were thinking a lot about over a century ago, economists are again thinking about them. It’s sad because this really isn’t about finding a better way to arrange our economy. This is instead a big effort at capitalism apologetics. It’s a faith-based belief that capitalism is the right system. These economists (and they are mostly “liberal” economists) are trying to tinker with the system to save it. No thought is given as to whether capitalism is worth saving — much less if it can be saved.

A question later on in the article starts, “The five largest internet and tech companies — Apple, Google, Amazon, Facebook, and Microsoft — have outstanding market share in their markets.” It then goes on to ask about anti-trust. That’s an issue with Apple, Google, and Microsoft.

For example, I think Google is the biggest search engine because it is the best. The truth is that a company could come in and destroy Google. Certainly Microsoft could have, but it never thought it necessary to create anything but Google with more images on the front page. Now it is true that Google might be immune to competition because at this point it is “good enough.” Any better search engines might be welcomed by people who have to do research seriously, but for 99 percent of the people Google is good enough. Even still, I can see Google losing out.

I leave Amazon alone, because it is kind of a hybrid of these companies on one hand and Facebook on the other.

Facebook is different a bird altogether. It is successful because it is successful. You could create a Facebook that is ten times better, yet it wouldn’t matter because what makes Facebook useful is that everyone is on it. So Facebook is a huge financial success due to nothing but the luck of timing (and having rich friends whose dads could back you — again: luck).

Last night, I heard on the news that someone was rushed to Zuckerberg San Francisco General Hospital and Trauma Center. Oh. That was the first I had heard of that. It appears that the boy no-wonder gave SF General $75 million. With a net worth of $58 billion, that is roughly equivalent to me giving SF General the contents of the wallet — and I carry very little cash on me. Yet in addition to being given ridiculous sums of money for being in the right dorm room at the right time, he’s given hugh societal pats on the back for what is the equivalent of me giving spare change to beggars.

Why Don’t Economists Talk About Capitalism Itself?

My point is not to beat up on Zuckerberg, however. I don’t find him particularly more evil than any other high tech billionaire. But the question is why is it, “The discourse on concentration, market power, and bigness in many US industries has increased dramatically in the last year”? And why isn’t it, “The discourse on the random and immoral natural of capitalism has increased dramatically in the last year”?

I know the answers to these. Regardless of all the pretense to economics being a science, it isn’t. And the people who practice it are trapped by their faith-based beliefs.

Whenever I talk about this kind of stuff, I know there are tech people out there who scoff at me. When I worked more directly in high tech, I used to talk about this stuff. I got lots of scoffs. But the responses I got were always the same old stuff. First: communism! Somehow, the fact the USSR under communism didn’t work as well as the US under capitalism is taken to mean something, despite the fact the US had a huge advantage to start with and then the lack of a world war decimating it.

Second: innovation! If it weren’t for capitalism, there would be no innovation and we would all still be farmers. But this is so clearly not the case. And there are other ways of encouraging innovation than making it like a lottery. What’s more, capitalism encourages people to game the system. Look at how litigious Apple and Microsoft have been.

When I look at innovation, what is normally the case is that people working at universities and national labs come up with new ideas, and then private companies come in and monetize them. Well, there’s no reason why the government and non-profits and worker collectives couldn’t do the same thing. (Note: in the old days, many corporations also innovated; but those days are long gone.)

Note that both of these reasons for why we absolutely must stick with capitalism are not based on evidence. They are just taken as given in our society. I’m not saying that I’m right. And I certainly don’t have all the answers. But I know that whether capitalism is the right system for us is a question, not a given. It doesn’t matter how well you think, if you can’t see the important questions, all the thinking in the world will take you nowhere. And we are getting there. Fast.

Image taken from Wikipedia. It is in the public domain.

20 thoughts on “The Problem Is Capitalism, Not Market Failures”