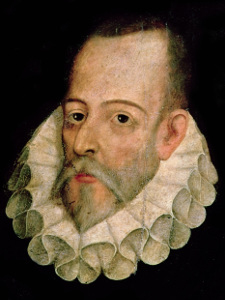 This period produced one great work of literature that ranks ahead of all others. It is the tale of Don Quixote de la Mancha, authored in two parts by Miguel Cervantes. In our literary canon, the novel has come to dominate the other forms in modern times. And with respect to the novel we can say, “In the beginning was Cervantes.” The genre springs from his work. And even today, after four hundred years, how many novels can begin to compete with this one? It is a work of amazing flexibility; it piles layer upon layer of meaning. It can be studied in universities and performed in Broadway musicals. Cervantes’s genius was to be simultaneously great, complex, subtle, and yet packed with immediate popular appeal. Cervantes fills a great panorama and he perfects the art of the tragicomedy. What seems at first blush a farce, a comic send-up, turns into a work filled with pain, loss, horror and introspection. What seems at first shallow soon emerges, especially in the second part, as a work of great philosophical depth; of wit and profound and timeless wisdom.

I have read Don Quixote three times in my life; the last time just now. On each reading, I felt Don Quixote said something to me about life and the times in which I lived. “Don’t be consumed in the quest for needful things,” it said, “the real quest leads inward. Beware of the vanities of the world, the frivolities of human existence. And remember wherever your life takes you, and whatever love you may seek from time to time, the need for kindness and respect, the essential qualities which make human life worth living. Life will bring pain and hardship, but have the disposition to be modest, to learn, to be kind and the edge will come off.” Cervantes wants to entertain his readers; but he also wants to reshape them.

Image of Cervantes that is probably not is in the public domain.