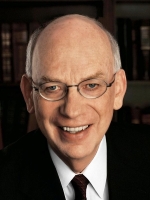 I’m not big on honoring the dead when I wasn’t inclined to honor them when they were alive. I mean, I would never go to the door of a grieving family and say, “You know, your father was an awful man who made the world worse when he had the power to make it better.” But that doesn’t mean that I will join in on the “What a good man!” chorus that’s going on. It’s all about Bob Bennett’s death bed wish to apologize to Muslims for the fact that Donald Trump will be the head of the Republican Party — Bob Bennett’s party.

Tim Mak reported on the story for The Daily Beast, Dying GOP Senator Apologizes to Muslims for Donald Trump. And it ends almost as poignantly as The Grapes of Wrath, “But even as he was passing away, Bennett struggled to press the issues — to ensure that though his life was ending, the ideas he held dear would not go with it.” But instead of a starving man being breast fed by a woman who just gave birth to a dead baby, it is the story of a multi-millionaire bigot who wants to be remembered as a Good Guy™.

Bigot?! Was Bob Bennett a bigot? Well, when it came to the LGBT community, he sure was. When it came to Sexual Orientation and Gender Identity, the Human Rights Campaign gave him a 0% rating. That was when 103 of 535 members of Congress got a 100% rating. And another 69 got a 90% or greater rating. So one-third of Congress got 90% or better, and Bob Bennett got 0%. He voted against legislation that would make it illegal to fire someone because of their sexual orientation. What a kind and accepting man!

I appreciate that he didn’t want to be remembered as a bigoted war monger who really only cared about the rich. But that doesn’t mean we should change history and remember him as something he never was.

But none of that matters because, “He would go to people with the hijab and tell them he was glad they were in America, and they were welcome here.” Now just to be clear, this kind of ostentatious personal outreach is actually creepy. And it puts the person approached in an uncomfortable position of being simply a member of a group. The act isn’t about them feeling welcome but about Bob Bennett feeling good about being welcoming. Imagine if I stopped Native Americans on the street to express my regret for the Trail of Tears. That’s what he’s been doing but Muslims are so actively discriminated against in the US today that his act is seen by many to be noble. It isn’t; it is just a different kind of racism.

Meanwhile, Bob Bennett did so much for corporation and so much to individuals. He voted against getting rid of the tax subsidy for companies that offshore jobs at the same time that he voted to make it harder for individuals to file for bankruptcy. He also voted multiple times to make it harder to sue corporations. He voted to further limit appeals on death penalty cases. He voted against taking racial statistics into account in death penalty appeals. And he was, of course, a big drug warrior. And he was against doing any rehabilitation in our prison system. He was, in other words, an entirely typical Republican.

When it comes to Donald Trump, it is hard to see how he’s all that much different. In 2006, he voted to build a wall along the US-Mexico border. He’s been against any kind of pathway to citizenship. So what we really see from Bob Bennett is your typical intolerant Republican who is upset that Donald Trump is so explicit about this stuff. It isn’t that he disagreed with Trump’s bigotry; it’s just that he doesn’t want to be associated with it.

There is another issue, however. Bob Bennett in general wanted to do whatever it was that big business wanted. So in general, he was pro-immigration — not for the sake of the individuals, but for the sake of the corporations that wanted to get low-cost workers. So even in his substantive disagreement with Donald Trump, Bob Bennett was still on the wrong side — for corporations and against humans.

So Bob Bennett is dead. He was 82 years old, so it isn’t that big a deal. And the man was very pro-war. He supported the Iraq War. And had he been in office, I’m sure he would have been against the Iran nuclear deal. He was one of many war enablers who allowed lots of Muslim children to never get the chance to live to 82 years. I appreciate that he didn’t want to be remembered as a bigoted war monger who really only cared about the rich. But that doesn’t mean we should change history and remember him as something he never was.

Martin Longman wrote a great article that is similarly unmoved, On Bob Bennett and Donald Trump. It goes into Bob Bennett’s association with Nixon’s Plumbers. Longman sums up, “But it’s a sad testimony that the party is now too awful for a guy with Bob Bennett’s moral compass.” That is to say: Bob Bennett doesn’t have much of a moral compass.

3 thoughts on “Bob Bennett’s Last Wish: To Be Misremembered”