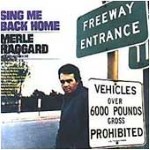 As I’ve been picking through these early years of Merle Haggard, it’s hard not to get angry. To most people, he is remembered by his most vile and largely artless work: “Okie from Muskogee” and “The Fightin’ Side of Me” and “Are the Good Times Really Over.” Those three reactionary songs are hard to get past. And it isn’t all. I like the song “Workin’ Man Blues,” but he has to ruin it with that crack about welfare. But there is a depth of feeling in his early work that is irresistible. Take, for example, “The Son of Hickory Holler’s Tramp” off Sing Me Back Home.

Story songs are tricky, especially when you don’t have much of a story to tell. And the story of “Hickory Holler’s Tramp” is a simple one. The singer’s father turns to booze and runs away with another woman, leaving his mother with 14 children to raise. So she becomes a prostitute, and the song is a celebration of that. And of course it should be. You do what you must for those you love. The song is highly sentimental, but it is hard not to find it touching.

Of course, there really is no disconnect between “The Son of Hickory Holler’s Tramp” and “Okie from Muskogee.” It’s just a question of empathy. Haggard understands a mother abandoned with children to raise, since that was the story of his mother, although under very different circumstances. But the stereotype of hippies he used again and again indicate that he knew nothing of the young people he stood in opposition to. The key issue is that songs are very personal. If you don’t have empathy, you lose something really important. And what you are left with are less edifying emotions.

But “The Son of Hickory Holler’s Tramp” is a really beautiful song: