A major complaint of liberals about mainstream news coverage is that it falls into a “Both sides do it!” narrative. So we see reporting like, “The Republican Party has stated that they will not consider any Obama replacement for Justice Scalia. But it is also true that Democrats have blocked Supreme Court nominations in the past.” While everything said there is true, it creates an equivalence that is false. In fact, blocking a nominee is categorically different from blocking all nominees. One pundit who has done a great job of calling out this kind of nonsense is Paul Krugman.

But the reason that false equivalence continues on, despite its obvious intellectual dishonesty, is that those who use it actually believe it. And Krugman is aware of this. He’s written about it many times. And it is widely understood. The news industry is filled with people who are committed to the idea that the Democrats and the Republicans are equal and opposite — by definition. These are people for whom it is easy to say, “Both sides do it!” And this is because they don’t see themselves on either side. They see themselves in the “sensible center,” where they are unbiased — just telling the facts.

Both Sides Do It!

So it was interesting to see yesterday that Paul Krugman is having his own “Both sides do it!” moment. He wrote, Trade and Tribulation. In it he argues that freer trade has largely been a good thing and that we would all be richer if only the political landscape were different. Well, I’ve been arguing the same thing for years. That is pretty much what I wrote in my poem and it’s what I’ve said many other times, like last year, No Trade Deals Until Our Economy Is Fixed. My point is that I don’t care what great things trade deals will bring if the great things aren’t shared. 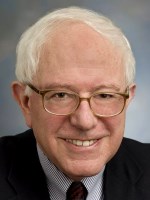 Krugman is making more or less the same argument, but being part of the power elite, it doesn’t have the kind of urgency that it does to, say, Bernie Sanders supporters. But I’m glad to hear Krugman say, “The elite case for ever-freer trade, the one that the public hears, is largely a scam.” But who are the presidential candidates who are saying this? Well: Sanders and Trump. But they also think that things like NAFTA were bad, which Krugman apparently disagrees about. I don’t know why. The same political system that makes trade deals today a bad idea made them a bad idea in the 1990s.

But there were only two people mentioned by name in the piece: Sanders and Trump. Krugman mentioned Trump’s continued use of Chinese currency manipulation. According to Krugman this just isn’t happening, but as Dean Baker pointed out, “China’s stock of reserves is more than $2 trillion above what would be expected if it were just managing its reserves for standard purposes.” But regardless, Krugman thinks Trump is wrong, and he said so.

On the other side of wrong, Krugman points out, “Sanders is demagoguing the issue.” How did he do this? By making an overly broad attack on “Hillary Clinton’s free-trade policies.” Wait for it: on Twitter. So Krugman is involved in his own false equivalence. (Well, he actually spends a whole paragraph on Sanders and a single sentence on Trump; if it comes down to Trump vs Sanders, will Krugman make a protest vote?!) But I’m sure that Krugman doesn’t think he is involved in this “Both sides do it!” business. Because in this case, he is the one in the “sensible center.” It’s just that his sensible center seems to include the entirety of the Democratic and Republican establishments.

This is what happens to people when their hysteria gets the better of them. I wrote about this yesterday regarding Hillary Clinton herself. But does Krugman really disagree with Sanders? I don’t think so. If Krugman and Sanders sat down together, they would largely agree. I don’t think that Sanders is against freer trade when it benefits everyone. But trade agreements without strong unions who are intimately involved in the negotiations is madness.

But it doesn’t matter what the substance is. We all know that Donald Trump is a demagogue, so Krugman doesn’t even have to mention that. When Sanders’ rhetoric gets a touch wild, Krugman is there to point out that he too is a demagogue — never forget that Sanders supporters! Meanwhile, pay no attention Clinton demagoguing the Sandinistas on national television. Both sides do it! It’s just that Clinton isn’t on a “side.” And remarkably, Krugman finds himself on the same non-side!

Image of Krugman altered from NYT official image, licensed under Fair Use.

4 thoughts on “Both Sides Do It: Paul Krugman Included”