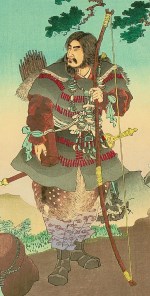 Happy National Foundation Day everyone! Don’t know what it is? Neither did I. Supposedly, on this day in 660 BCE, Emperor Jimmu founded Japan. You might question this given that he was supposed to have lived from 711 BCE to 585 BCE, which would have made him 126 years old when he died, which is over three years older than the oldest person who ever lived (that we can verify). It’s also about two years older than what seems to be the theoretical maximum age of humans due to cell regeneration. Just the same, no one seems to actually believe that Emperor Jimmu lived to be that old.

In the Kojiki, oldest extant history of Japan dating back to the early 8th century, it says that Emperor Jimmu was a real guy. That’s a long time between event and history, however: roughly 1,400 years. Plus, the Kojiki is where we get the 126 year lifespan. And in the Nihon Shoki (written a decade after the Kojiki), it tells us his reign was from 660 BCE to 585 BCE. That’s a reign of 75 years! And one that started when he was 51?! Kind of old to be conquering countries. So clearly, by that time, much myth had been introduced into the story. And it strikes me as fanciful. But any reason for holiday is good by me!

Huangdi (the Yellow Emperor) is said to have started the Chinese civilization back about 2700 BCE. And he just so happen to reign for a century. Of course, there is no doubt that he is mythical. He only started being referred to as a historical figure some 2,500 years after his supposed rule. He appears to have been a god that was later historicized.

But Emperor Jimmu could have been a real guy, just papered over with myth. But you have to follow the list of emperors roughly a thousand years before you start to see anything that looks normal: short rules, reasonable life lengths. The supposed 11th emperor at the beginning of the first century, Suinin, supposedly ruled for 41 years and died at the age of 138. Not that it makes sense to try to make sense of it, but that would mean he became emperor at the age of 97.

Regardless, myth is important. But there is a down side to this kind of thing. It gives the impression that Japan was started by someone. And that isn’t true. Even people who fetishize George Washington understand that he didn’t found the United States — that it is the result of an entire social movement, centuries in the making. At least, I hope they do.