I want to talk about productivity and inflation. This is partly just to nail down the issue for me. But also, I think I talk about this stuff in a way that assumes a knowledge that many people don’t have. Most people think of inflation as “printing money.” By this way of thinking, the economy is worth a certain amount and if there is more cash, then it is worth less. This isn’t true because money is a medium of exchange, not a reflection of the value of the economy — at least not directly.

Let’s consider an example. Imagine a world in which all workers and capitalists are paid according to their value. In this case, we assume we have no inflation. Now if one set of workers gets a raise, it will make the cost of whatever they are making go up. This is inflation. But if productivity went up at the same rate, this would not be inflationary. The workers would be paid, say, 3% more, but they would be producing 3% more stuff.

We don’t have such an economy. In our economy, largely because of governmental policy, capitalists get far more money than they deserve and workers less. Workers find themselves in a monopsony. If they can form unions or otherwise push back against this, it is possible that they will get more money by taking away some of the undeserved profits of the capitalists. In this case, workers can get a raise without causing inflation.

But at this point, the Fed should error on the side of creating jobs and not worry about inflation.

So we end up with inflation just in the case where workers get pay increases that, in an economic sense, they don’t deserve. (Obviously, this is not just about workers. If the price of oil goes up, it will cause inflation, for example.) The point I want to get across here is that inflation is not something we need to worry about in the modern American economy. For the last 40 years, workers have seen their wages stagnate even as productivity has continued to go up.

Given my simplistic story of inflation here, we should have seen deflation. But, of course, we haven’t. And that is because overall “wages” (wages and profits) have gone up at the rate of productivity. It is just that with tax laws and anti-union policies, the vast majority of the fruits of that productivity gain has gone to the capitalists. This has resulted in a huge increase in inequality. 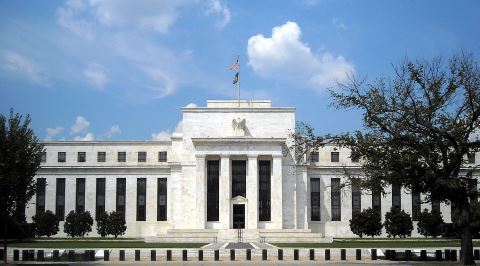 And this brings us to the Federal Reserve. They are the ones who “print money.” And they are the ones who are hyper-concerned about inflation. Their biggest concern is that wages are going to start rising and this will cause inflation. That’s a valid concern. But it is only a concern because the capitalists will insist upon keeping their undeserved profits. There would be no inflation if increased worker wages came at the expense of overly generous business profits. But obviously, this is not something that the Fed has power over.

But at this point, the Fed should error on the side of creating jobs and not worry about inflation. Jobs help workers and inflation hurts the rich. But what the Fed means when it talks about raising interest rates to stop inflation is that it is going to put millions of people out of work and put even more pressure to keep wages low on those who have a job.

So we have an economy where workers are in a double bind. They aren’t making as much as their productivity would indicate. But when the economy gets good enough that their wages start rising, the Fed increases rates to stop it. This is why we can’t depend upon the Republicans’ big answer to save the poor: “Growth!” All the gains of growth go to the top. And that is something we have to fix in our regular political system.

“US-FederalReserveBoard-Seal” by U.S. Government – Extracted from PDF file here, and colorized according to GIF file on this page (direct GIF URL [2]). Licensed under Public Domain via Wikimedia Commons.

4 thoughts on “Why Economic Growth Won’t Save the Poor”