All day today, I’ve been seeing articles that I’d like to comment on but don’t feel like there is enough to say for a full article. And then I thought, “What about another Odds and Ends?!” This is exactly the situation that I originally started the series for. Just the same, in this case, it may just be that I’m tired. I stayed up very late last night and then didn’t sleep well. You would think it would be because I was drinking, but I was actually working. Oh well.

Michael Hiltzik brought my attention to something interesting, Has Uber Already Peaked? There is a new study out by some investment types that looked at what’s going on in New York. Apparently, at this point, Uber drivers are as likely to cannibalize each other as the regular taxicab drivers. It looks like the reason for this is that Uber has saturated the market with its drivers and they quickly find that they don’t make much money. It comes as no surprise that this “new economy” job — despite the fact that all the upfront costs fall on the worker — only pays about minimum wage.

John Nash was one of the greatest mathematicians of the 20th century — a century that had some great minds. You know, he’s the guy in A Beautiful Mind. He is known primarily for his work in game theory, and as such, he’s had a great influence beyond mathematics — most especially economics. He died earlier this year at the age of 86. He was also mad as a hatter.

In 1948, Nash apparently asked physicist Richard Duffin to write him a letter of recommendation for graduate school. The letter is wonderfully on point: 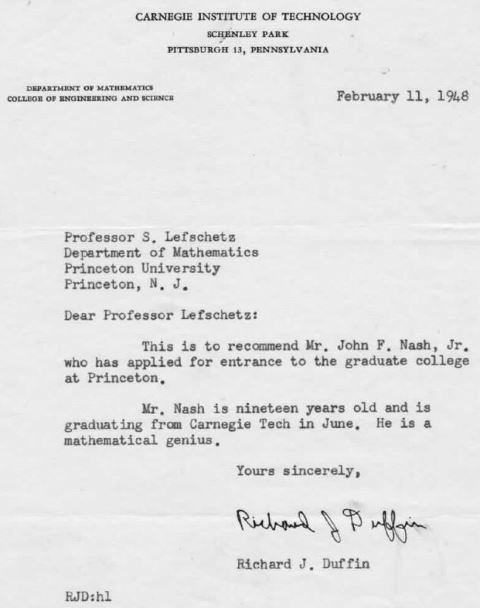 Matt Yglesias got it exactly right in an article last week, Donald Trump Used to Be the Most Interesting Person in Politics, but His Tax Plan Made Him Boring. As I said many times around here, Trump’s actual policies were better than any of the other Republicans running for president. His rhetoric was bad on certain issues, but his policies were no worse than the others. And on economics, he was talking like an actual populist. But then he brought out his tax plan and it was not qualitatively different from Jeb Bush’s — it was just worse. And you have to wonder: if this is what a self-funding Republican is for, it must be that the party is not dysfunctional because of its dependence on courting billionaires. They just really believe all their supply side claptrap.

Airbnb Thinks You Should Trust It

I’ll end with another Michael Hiltzik article, No surprise: That Airbnb Study of Rentals in LA Isn’t What It Seems. Airbnb put out a study claiming that its influence did not incentivize the transfer of long-term rentals into short-term rentals. But the company implied that it had analyzed data with a UCLA professor, when all that he had done was go over their procedures — he’s never seen the data and does not vouch for it. Of course, no one has seen the data. Airbnb won’t make it available — even to government regulators. So should we trust them? The business community does not have a good record of putting out objective research that just happens to prove that the best thing is for them to do exactly what they want to do.

That’s all for now folks. Have a good evening and I’ll check in with you in the morning.