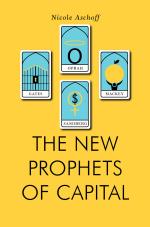 I just got Nicole Aschoff’s new book, The New Prophets of Capital. I haven’t had a chance to read it yet, but I just wanted to reflect on the subject for a moment. The book looks at four really rich people who see problems with our capitalist system and want to do something about it: Sheryl Sandberg (COO of Facebook), Bill Gates (you know), John Mackey (Whole Foods), and Oprah Winfrey (Oprah). But none of them actually want to fix capitalism, because, as Chico Escuela would say, capitalism been berry berry good to them. So Sandberg, for example, doesn’t think that capitalism ought to do anything to help the family, but that the family should be more accommodating to capitalism.

Of course, Gates isn’t actually interested in a more educated workforce. He’s a sophisticated man. He understands that industry did just fine when it did its own training. What education “reform” is all about is getting rid of teachers unions. And that’s all about getting rid of one of the few remaining decent paying middle class jobs. I know this is a very negative view of Gates, but there are a lot of things that could be done to improve education in this country, and he chooses to do just those things that will enrich him and his children even more.

The main thing is that the rich are not going to solve our problems with inequality and stagnant wages. I’m not saying that they couldn’t. But their approach is to ignore the problem that stares them in the face, and nibble around the edges. As Matt Yglesias used to say, “If you want to help the poor, give them money.” But that’s the last thing that any of these people want to do. Each one of these people has more money than they could ever reasonably spend. That’s the one thing they know about: their money. And they have no interest in giving any of it up. But when it comes to the advice they give out, they have very little knowledge. But they are very generous in sharing it.

My biggest general problem with conservatives is that they refuse to approach a problem with the available solutions. They always start by casting aside the most obvious (and usually effective) solutions because they are not acceptable ideologically. It’s the same with these billionaires (and in Mackey’s case, close enough): they refuse to look at the obvious solutions to our problems — like allowing collective bargaining. So all they are left with are marginal and often harmful “solutions.” We need to rethink the whole system, not tinker with it.