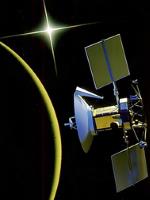 On this day in 1990, the Magellan spacecraft achieved orbit around Venus. It had two primary goals: map the surface and gravitational field of the toxic cloud covered planet. Venus is in many way like Earth. It is almost exactly the same size and density. They both seem to have a similar internal structures. They are both losing heat at the same rate. Yet, as Carl Sagan put it: earth is like heaven and Venus is like hell.

Venus’ surface pressure is almost a hundred times the surface pressure here on earth. Standing on the surface of Venus would be like being a half mile under the ocean. You know: deadly. But it’s worse than that, because it is also incredibly hot. It is 860°F, which is, you know, hotter than any regular kitchen oven. In fact, it is even hotter than the hottest pizza ovens. Venus is very, very hot. In fact, it is hotter than Mercury at noon, even though Venus only gets 25% as much energy from the sun.

The reason for this is because almost 97% of Venus’ atmosphere is composed of carbon-dioxide. This creates the mother of all greenhouse effects. Or it would, if the greenhouse effect weren’t a myth created by a conspiracy of Al Gore and James Hansen. Moving on. This fact (or myth) combines with two other aspects of Venus to create a very constant temperature: almost no axial tilt (just 3° compared to 23.5° for Earth) and almost a circular orbit around the sun (eccentricity of 0.007 compared to 0.017 for the Earth). So day, night, pole, or equator, Venus is just too hot even for cooking pizzas. But the temperature does decrease with altitude. So on top of Maxwell Montes — the highest point on Venus at 7 miles — it is only about 700°F. And you know what that means: great pizza oven temperature! (Fun fact: there may be lead sulfide “snow” on top of Maxwell Montes!)

The Magellan mission made a number of discoveries about Venus. For example, it found that the surface was young. It is covered with volcanic material. It appears to have river-like lava flows. It is also geologically active, but doesn’t seem to have plate tectonics. And there is little evidence of wind erosion. Now this is actually something I know a little bit about. First, Venus rotates very slowly (and in the wrong direction), so not much in the way of Coriolis effect. And there are no temperature gradients, so not much mixing due to that. So the atmosphere is very static.

Anyway, when all the world gets you down, NASA is there to cheer you up: humans are good at doing positive things. And that’s true, even if we ultimately learn that it is nasty out there!