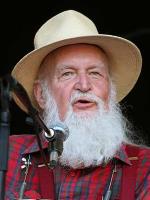 In the early part of the 20th century, members of the Industrial Workers of the World (Wobblies) were in conflict with the Salvation Army, which they referred to as the “Starvation Army.” It used to be a very big thing among Christians to say that we didn’t need to worry about earthly possessions because God would reward us in the afterlife. Well, the Wobblies weren’t too keen on that. They had this thing about eating.

So in 1911, Joe Hill wrote another of his songs, “The Preacher and the Slave” — often referred to as the refrain, “Pie in the Sky.” It is a parody of the hymn “In the Sweet By-and-By.” Here is the great Utah Phillips doing the song live. “Folk music belongs to everybody…” That’s no lie!