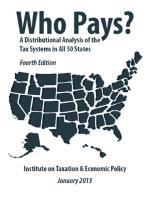 While reading a very good article about Rick Perry by Jonathan Chait, I came upon this amazing report by the Institute on Taxation and Economic Policy (ITEP), Who Pays? 5th Edition (pdf) — that’s the 2015 version of the report. What’s interesting about the report is how it looks at how much money is paid in taxes by people in different income groups. In general, people present it as total amounts. But that isn’t fair because (obviously) the rich make more than the poor. So the report looks at the percentage of the income that each group pays in taxes. And the results are astounding.

The situation is far worse in individual states. That shouldn’t be surprising. What was going on in Ferguson was just an especially egregious example. What I’ve seen everywhere is that taxes that hit the rich are rolled back, only to be replaced by flat or regressive taxes. And this is not just a red state problem, because the neoliberals are often even worse than the conservatives. The ten most regressive states are (from worst to least worst): Washington, Florida, Texas, South Dakota, Illinois, Pennsylvania, Tennessee, Arizona, Kansas, and Indiana. That’s three blue states, and two of them are in the top five.

In Washington, the bottom 20% pay an average of 16.8% of their income in state and local taxes. The top 1% pay only 2.4%. That means the lower class is paying seven times what the rich are paying. Evening looking at lower class and the middle class is terrible: the lower class is paying two-thirds more in taxes than the middle class. The situation in the least worst state, Indiana, looks pretty good, but only in comparison: the lower class only pays 2.3 times what the rich pay. But in that case, it’s almost as bad for the middle class who pay just over twice what the rich pay. How does this happen? It happens by instituting regressive taxes. The best way to do that is to have no income tax and depend heavily on consumption taxes. Of the ten most regressive states, they either have little or no income tax, a flat tax, or a low top tax rate.

The least regressive states are: District of Columbia (DC), Vermont, Minnesota, Delaware, Montana, Oregon, and California. Those are more or less in order, but it does depend upon how you calculate it; I’ve just compared the lower class to the upper class. What’s interesting is that by this measure, only DC is progressive; the others are all regressive to one extent or another. And DC is quite regressive when comparing the middle class to the upper class. But these states manage to not be too bad mostly because they have progressive income taxes, tax credits, and low use fees.

The one thing that I wish people would take away from the report is this graph: 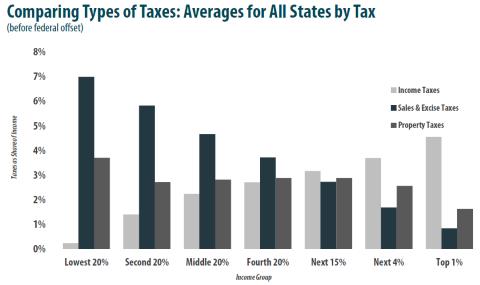 What it shows is that both use and property taxes are particularly regressive. Only the income tax is modestly progressive (and hardly even that when you look at the middle class). But all you ever hear conservatives talk about is the income tax. This is a con. They know that the tax system is stacked against the poor in a big way on every tax but the income tax. But they’ve managed to fool the whole country into thinking of taxes just in terms of the income tax.

And this is what allows there to be a steady whine coming from Fox News and CNBC about how badly the rich are treated. Well, look at “Who Pays?” It’s bad enough that the poor are screwed by the tax system. But we also have to listen to rich complain about how much they suffer. It’s unbelievable.