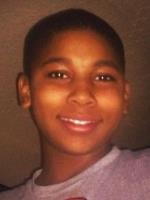 A report totaling hundreds of pages has been released regarding the shooting death of Tamir Rice, the 12-year-old boy who was playing with a toy gun in a public part in Cleveland. Not surprisingly, the officers involved claim that they had no choice but the kill the boy. Several things struck me while reading German Lopez’s overview at Vox, New Documents Reveal Details About Cleveland Police Shooting of 12-Year-Old Tamir Rice. It seems strange that after going through this exercise, the report isn’t more clear. And even after this, it is still questionable whether there will be an indictment. And it is almost certain that the officers will be found not guilty if they are forced to go to trial.

Much has been made of the fact that the orange tip on the pellet gun was missing. But this seems to be irrelevant. Officer Timothy Loehmann claims that he was forced to shoot Rice because the boy went for the gun that was in his waistband. So the officer wouldn’t have seen the orange tip even if it had been the there. The only thing that would have been different is that after shooting Rice, the officer would have known right away what he had done. Now that might have been useful to know because Rice didn’t die right away.

There was an FBI agent who was in the area and came to scene between four and five minutes after the shooting. He immediately started to administer first-aid. According to Lopez’s article, “The FBI agent described Loehmann and [officer Frank] Garmback as almost shell-shocked — wanting to do something but not knowing what to do.” Rice was eventually taken to the hospital where he died the following night. So in addition to driving up on Rice and quickly shooting him, the two officers did not treat him properly after the incident. I don’t know if Rice would have survived if they had, but when the FBI agent showed up, Rice was still conscious.

Loehmann said of the shooting, “He gave me no choice. He reached for the gun and there was nothing I could do.” This is the sort of thing we hear from police officers all the time. But I’m curious why it is that officers who think they might be dealing with a dangerous person with a gun are so careless about driving up to them. If Rice had been a madman with a gun, he could have just shot both the officers before they ever got out of the car. So the idea here seems to be that the police should just throw themselves into situations where wiser people would be cautious. And then at the slightest sign of trouble, they should just start firing away.

In this case, there is enormous culpability. I don’t think we can say that Loehmann is guilty of murder. But both he and Garmback seem to be guilty of reckless endangerment. And their total uselessness in getting Rice medical attention after he was shot must be seen as criminal negligence for two men who were supposedly trained to deal with situations like this. But I suspect that this is the problem. As far as I can tell, our police officers are trained to be like George Zimmerman: belligerent cowards. The slogan of the police should be changed to, “To protect and serve ourselves.” And the iconic statement should be, “Just the facts ma’am — right after I call my union rep.”

2 thoughts on “Culpability in the Death of Tamir Rice”