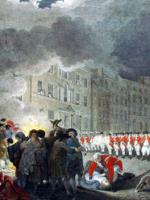 On this day in 1837, the Broad Street Riot occurred. It was between English protestant firefighters and Irish Catholic immigrants. It seems that Fire Engine Company 20 was coming back from a fire. There’s nothing that brings on a thirst like fighting a fire, so the men stopped at a bar and got a bit toasted. On their way back to the station, they came upon a funeral procession of Irish Catholics. One of the firefighters insulted or assaulted the Irish and a fight started.

Before long, the firefighters retreated to their station — just like their modern equivalent pussies, the police. And then, because they hadn’t shown themselves to be big enough wimps, they sounded the fire alarm, calling firefighters from all over Boston. Eventually, the mayor had to call in the military to put a stop to it. Interestingly, however, no one was killed. That would never happen today because there would be so many guns around. Also: there would be so many pussy police officers who were vewy vewy awraid!

But one thing was entirely typical of how things work today. In the end, only three people were convicted of any crimes, and they were all Irish Catholic immigrants. Note that I’m not saying there is anything special about the Irish Catholics. Today, they would be the oppressors. That gets to my core belief, which is the moment a group has power, it abuses it. And the rest of the society does everything to justify why that is right and proper.

Think about the swimming kids in McKinney, Texas. Would anything at all have happened to Officer Eric Casebolt if the whole thing hadn’t been caught on video? If there was any room to doubt at all, the society would have sided with him and that would have been that. The children he abused — far from being sympathized with — would have been vilified and jailed. That’s the way things work in America. And it ever was so.

We mark this day 178 years ago when the American tendency to hate immigrants erupted in violence.