Last week, the economist Timothy Taylor wrote, When a Summer Job Could Pay the Tuition. He noted that when he graduated from high school (1978), one could work one’s way through college with a minimum wage job: part-time during the school year and full-time in the summer. Now that isn’t possible. He used the graph below, which he took from a lecture by David Ernst. What it shows is a time series of the number of hours a student would have to work to pay the tuition at the University of Minnesota. When Taylor was in college, it was about 300 hours per year. By the time I was in college — just a decade later — it was double that. And today, it is roughly 1,600 hours.

There are two aspects of this: tuition increases and the minimum wage decreases. I went to the University of Minnesota’s website and found this convenient document (pdf) that lists the tuition rates dating back to 1960. I chose a base year of 1968, because that was the high water mark for the minimum wage. The tuition at that time was $294 for instate undergraduates. Today, it is $12,060. That represents an averageincrease of 8.4% — a bit more than double the rate of inflation. If tuition had only gone up at the rate of inflation, it would be only $1,974 now. So tuition is a big part of the problem here. 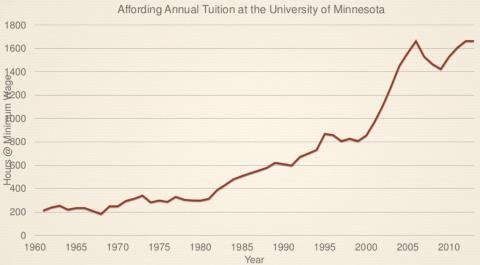 Clearly, both education inflation and the regression of the minimum wage have been major factors in making a college education far less affordable. From the looks of it, I think that the minimum wage is the larger issue. It’s telling that the focus of the educational affordability discussion (even among liberals) is so focused on tuition. Whenever I hear this kind of thing, I think the subtext is, “Those college professors make too damned much money!” I have no special love for academics, but I’m skeptical when the focus for helping the poor is tearing down the middle class. The minimum wage hasn’t been decoupled from the economy so that college professors could make more money.

I have to give credit to Ernst and Taylor, because this is a good way to look at the question of affordable college educations. And I think what it shows is not so much that college tuition is growing too fast — although it is. It is more that the rewards of our economic success are not being widely shared. Notice that a big part of the increase in tuition in state schools here in California is not because education is getting more expensive; it is because the state is paying less and less of the bill. When I was paying $500 per semester in the 1980s, I was paying only a fraction of the cost of my education. Today, students pay a much higher percentage of the actual cost. (Very roughly, adjusted for inflation, students pay ten times what I did.)

There is a weird kind of tension in any discussion of college affordability. There are many people who claim that inequality is just a question of education and if we all got college degrees, everyone would be rich — or at least “middle class.” At the same time, our inequality has made getting an education extremely hard. But I think we have to stop thinking this way. The problem is that we have unsustainable levels of inequality. Making education more affordable is a laudable goal. But it is no substitute for addressing economic inequality head on. And in most cases, I think the loud voices crying about skyrocketing tuition are using the issue as a distraction to keep us from dealing with the more fundamental issue.