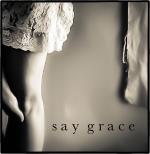 Reader Ryan Hall introduced me to the folk/country singer-songwriter Sam Baker. He’s rather like John Prine in his approach to telling a story through music. But he’s less inclined toward traditional melodies with greater care in his lyrics — using a kind of talk-singing that is highly evocative. Apparently, when he was 32, he was badly injured during a terrorist attack while traveling in Peru. Many of those traveling with him died. His left hand was so damaged that he had to relearn the guitar with the other hand. Regardless, he’s just amazing.

Here is the title song off his album Say Grace. It’s about an older woman considering her life — past and present. Things don’t have to go wrong — they just get sadder inch by inch — and we push on. I especially like these lines: “The TV says war in the holy land; she looks at the wrinkles on the back of her hand.” Exactly.