We liberals have got to find a better way to point out the nonsense of Republican economic policy. Last night, Jonathan Weisman at The New York Times wrote, Obama’s Plans for Deficit and Taxes Are Detailed on Eve of Budget Proposal. In it, he quoted Paul Ryan repeating what is the most annoying Republican talking point in a decade, “The Obamanomics that we’re practicing now have exacerbated inequality. They’ve exacerbated stagnation. They’re made things worse.”

This is the same argument that Republicans have been making for decades, although in different words. Since the Democrats — just thirty years late — have decided to talk about income inequality, the Republicans have decided to grab the issue themselves. Certainly, this is at its base just more, “I’m rubber and you’re glue.” But at a minimum, it muddies the water. It now seems to be the case that everyone “cares” about economic inequality. At Davos this year, even the billionaires were stroking their chins in its direction. 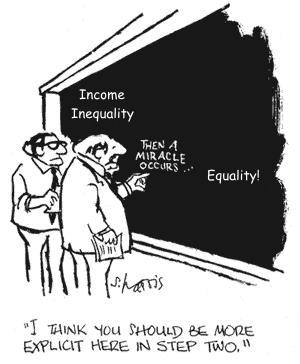 Of course, the folks at Davos were not talking about food stamps and low income housing. Those kinds of programs would require that the rich sacrifice something — at least temporarily. That’s unacceptable. The Republicans are exactly the same way. For example, Ryan said, “It’s hard to imagine the president is going to want to work with Congress on entitlement reform.” Entitlement reform?! That’s the great idea to mitigate economic inequality?

So how should liberals counter these claims by the Republicans? What we can’t do is what Jonathan Chait did, Paul Ryan’s Most Shameless Lie Ever. He argued that Obama’s policies have reduced inequality — they just haven’t reduced it enough to overcome the structural forces that are causing more inequality. He’s right. But I wouldn’t give Obama too much credit there. Like the whole New Democratic movement, Obama is very much in favor of those very same structural forces. Just look at his continued support of TTIP and TPP. But even if we do give Obama credit, Chait’s argument is still incredibly weak.

Chait claimed that Obama has pushed against income inequality by raising taxes on the rich. But Ryan is still a supply-sider. He would simply counter that raising taxes on the rich just slows economic growth. And that’s true in the current situation where those higher taxes were simply used to pay down the debt in a depressed economy. And let’s fact it: Obama barely raised taxes. Chait provided a table that showed that even for the top 1%, Obama’s policy lowered taxes. It was only for the top 0.1% that taxes actually went up — and only by six percentage points.

What’s more, he presented a graph that shows that Obamacare is going to substantially increase the incomes of the bottom 20% of the country. That’s great! But it also shows that the lower-middle, middle, and upper-middle classes are all paying more than the upper class is. In addition, the lower one’s income (other than for the bottom 20%), the more one is negatively affected. In terms of economic inequality, harming the middle 60% of the nation is counterproductive.

At this point, I think that most people understand that supply side economics — trickle down — is hogwash. If Republicans want to claim that they care about economic inequality, let them. But don’t counter it with talk of transfer programs — especially when those transfers are usually very small. Talk about what Republicans want to do. And what they want to do is to give more money to the rich because even after 34 years of failure, they think it will trickle down to the rest of us.

2 thoughts on “The New Republican Trickle Down Con”