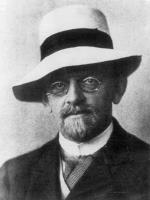 Hilbert built on Galois’ work in invariant theory, but he was also very interested in geometry and mathematical logic. Sadly, my grasp of this stuff is tenuous at best. This understandably limits my ability to discuss them. But it isn’t the specifics of the math that I care about getting across. It is just that it so aggravates me that most people have such a skewed notion of what math is. Most people think it is multiplication tables. Yet I can hardly think of a less mathematical thing. For one thing, it is about memorizing. For another, it is about numbers. Math isn’t about numbers! And something you will notice if you look at a discussion of Hilbert space is that numbers are never used! About the only place where numbers are used is in number theory — and even there, you won’t find many numbers, because it is really about the nature of numbers and not the numbers themselves.