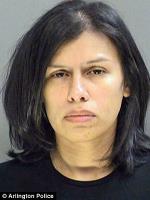 Veronica Dunnachie seems to have killed her estranged husband and his adult daughter. There is nothing especially significant in the report of yet another disturbed person killing people. What makes this case notable is that Dunnachie was an outspoken advocate for open-carry laws. On the plus side, there were three small children in the house and she didn’t kill them. (Or even shoot them, bless her heart!) After performing the deed, she drove herself to a local mental hospital and checked herself in at the urging of another open-carry advocate. The police later arrested her there and she is now in jail.

According to Daniel Strauss at Talking Points Memo, “Reached by TPM on Thursday, Arlington, Texas police pointed to Dunnachie’s Facebook page and the photos on there showing her involved in Open Carry Tarrant County and pictures of Open Carry Texas.” The police said that they couldn’t comment on her affiliations “but if you go to her Facebook page, it’s pretty clear.” Indeed it is. Sadly clear. The Facebook page has been taken down. But here is an image of her exercising her Constitutional rights at what looks like a fast food restaurant, grabbed by Hunter at Daily Kos (apparently originally on Liberaland): 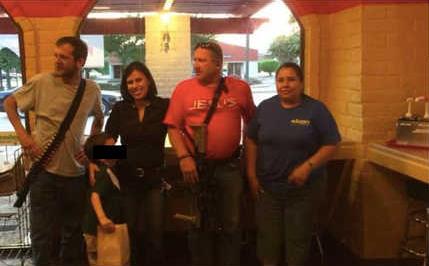 I’m surprised that this story has not gotten more traction. Maybe it is just that it is so predictable. Somewhere I saw someone say something obvious but profound, “It’s amazing how quickly a ‘good guy with a gun’ can turn into a ‘bad guy with a gun.'” Or “gal” as the case may be. Of course, even with the minor coverage, the pushback has begun. Yesterday, Liberaland published, Open Carry Group Denies Double Murder Suspect Was a Member, but She Was. You really should click over to the article. It not only has a lot more details about what happened, but it has great snarky comments about the open carry groups’ pathetic attempts to distance themselves, like the following:

Open Carry Tarrant County’s leader Kory Watkins is denying any affiliation with Dunnachie. Watkins told Guns.com that Dunnachie “was not a member of the group.”

Here is his organization on Facebook calling her “One of our members.”

I’m interested in the psychology of the open-carry advocates. Most states allow pretty much anyone (other than felons) to get concealed-carry licenses. Why is open-carry necessary? I don’t think it is about not wanting to wear a jacket. I think it is about rubbing the fact that you are armed in the faces of everyone around you. It is a power trip. It’s about saying, “Don’t mess with me!” But what kind of loser is so insecure that they need to do that?

Sadly, I think the psychology is very similar to that of Bill White, that I discussed exactly a year ago, How to Not Become a Neo-Nazi. In that article (one of my better ones), I pointed to the fact that White seemed to lack meaning in his life. He was running around from cause to cause until finally finding a home with the neo-Nazis. I see a similar need with the open-carry brigade. But just as finding his cause made White a dangerous man, open-carry made Veronica Dunnachie a dangerous woman.

I’m always reminded of this great Tom Tomorrow cartoon, “I said after you, dammit!” I have little doubt that Dunnachie is mentally unstable. And break-ups are very difficult. But a situation that would normally end in a slap fight ends with two people dead, because a mentally unstable, emotionally fragile person had a gun. And in Dunnachie’s case, she always had a gun. Because “freedom.” But that’s a mighty strange concept of freedom: people have to die because a bunch of rudderless people have decided that if they aren’t allowed to carry guns everywhere, the black helicopters will come.