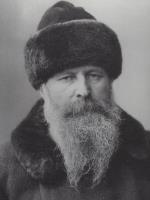 On this day in 1842, the great Russian painter Vasily Vereshchagin was born. He is best known as a war artist. In the days before photography, armies had painters to immortalize their acts. The job wasn’t as much like a modern photojournalist as it was the poets who warriors have kept around for millennia to write songs of their exploits. Vereshchagin traveled all over the world documenting wars and a lot more. He was one of the first Russian artists to be highly regarded internationally.

At the age of eight, he was sent off to military school. From the age of 16 to 21, he was in the Imperial Russian Navy. At that point, he left and began studying art. A year after that, he was studying in Paris with Jean-Léon Gérôme (who I actually like a lot more). After studying there for a couple of years, he got a commission to travel with a Russian expedition to Turkestan. It was from these travels that my favorite of his paintings came, The Apotheosis of War:

This painting was not well received by the Imperial Russian Army, but most of his work was more traditional. After this time, he spent a couple of years traveling through India and Tibet where he did a lot of beautiful and, for him, unusual work. But by 1878, Vereshchagin was back with the Army at the Russo-Turkish War. His brother was killed during it and he was seriously wounded himself. Because he was actually a soldier, he saw war in a very objective way. And he didn’t like it. His work became more and more anti-war and didactic. For example, he was highly criticized for Suppression of the Indian Revolt by the English, but I have a hard time believing that it isn’t largely true. The British weren’t close to the worst colonial power, but they were nonetheless a colonial power.

In my research of war artists, I’ve found that few of them live to be very old. It is just too easy to die in war zones. If it isn’t the shelling, it is the disease. Vereshchagin was no different. He was invited to come and document the Russo-Japanese War. While traveling on the Russian battleship Petropavlovsk, it struck two mines and sunk. Vereshchagin did not survive.