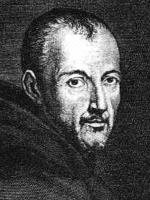 On this day in 1588, the great intellectual Marin Mersenne was born. He was a mathematician, philosopher, theologian, scientist, and most of all, music theorist. But what was most important about him was how he built relationships. He was friends and correspondents of some of the greatest minds of his time including: Étienne Pascal (father of the more famous Pascal), Constantijn Huygens (father of the more famous Huygens), René Descartes, and Galileo Galilei. Those last two, he spent a lot of time and energy defending. He also put together the Académie Parisienne, which was a direct predecessor of the Académie des Sciences and the Royal Society.

Marin Mersenne’s greatest work was Traité de l’harmonie Universelle, for which he earned the moniker “father of acoustics.” It deals with string vibrations and how they relate to tone. This was something Mersenne spent a lot of time on. He also developed the physics of spring oscillations.

One of his many great contributions to knowledge is his early study of what have become known as the Mersenne primes. These are prime numbers that are of the form 2 to the n power minus one. For example, 3 is the first Mersenne prime because 2 to the power of 2 minus one is 3. These are extremely rare. Only 48 of them have ever been calculated. The 48th one is an enormously large number that my spreadsheet died trying to create:

Just to be clear, that’s a 3 followed by 619 zeros! But here is something really interesting: if n is not prime, then Mn is not prime either. The funny thing about Mersenne, however, is that he put together a list of the Mersenne primes up to n=257. But he screwed up. He included n=67 and n=257, which are not prime. And he didn’t include n=61, n=89, and n=107 — all of which are prime. But I don’t blame him. That’s tedious work!

In addition to his direct contributions to knowledge, he translated a tremendous amount of work, especially that of Greek mathematicians. He also helped Galileo translate a number of his works. Basically, Mersenne was a very valuable guy to have around during an intellectual revolution.