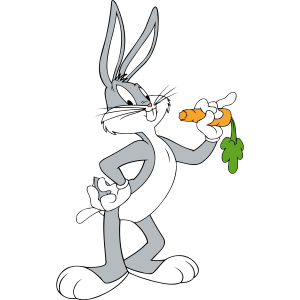 Before getting to the burning question of whether Bugs Bunny is a rabbit or a hare, let’s take a step back and take a look at this colorful character.

A Brief History of Bugs Bunny

Note that I used an apostrophe after what has become his first name. It is in reference to the director of the first cartoon to feature the character, Ben Hardaway, whose nickname was Bugs. Thus, animators started referring to the nameless character as “Bugs’ bunny” (and later “Bugs’s bunny”) — not a name, a description. But the name stuck, even if the apostrophe didn’t.

Skip right to the answer!

The cartoon in question is Porky’s Hare Hunt. But the bunny in that film is not much like the Bugs Bunny we have grown to love.

For one thing, he sounds like Woody Woodpecker — literally. In 1940, Mel Blanc moved the voice from the one character to the other.

Also, this early character doesn’t have the intellectual sophistication that he will eventually develop. (Although he’s still way smarter than Porky Pig and most humans I know.) He’s mostly just a spaz, like Daffy Duck in his early versions. (He was first introduced in the similarly titled, Porky’s Duck Hunt.)

In addition to this, Bugs doesn’t look the same. He’s quite short — again, like the early Daffy Duck. And he is all one color. But there is a continuity. It’s kind of like the ship of Theseus: if all parts of a ship are gradually replaced, is it still the same ship? There isn’t one answer to that; it is just a way of thinking about what is is.

But in the case of Bugs Bunny, I think we can say that this little Woody Woodpecker laughing bunny is indeed a form of the iconic character.

This is not the consensus view, however.

Porky’s Hare Hunt was from the Looney Tunes series, and Bugs Bunny really is a Merrie Melodies character. Thus, most people consider the first appearance to be in the 27 July 1940 film A Wild Hare:

And he evolved from there. Frankly, I believe at some point he crossed a line and became uninteresting. It’s hard to set a precise moment, because there is no such moment. But it was when Warner Bros Cartoons went postmodern. That’s when there was Bugs Bunny the actor and Bugs Bunny the part he played.

Not that good postmodern cartoons weren’t made. Duck Amuck is one of the best things Warner Bros Cartoons ever did.

It’s more that Bugs Bunny became so sophisticated and so in control that he lost his zany. But there’s a lot more great Bugs Bunny than meh.

Is This a Question Worth Asking?

As far as I know, I was the first person on the internet to ask and fully answer the question, “Is Bugs Bunny a rabbit or a hare”? People go their whole lives without asking the really important questions.

It was a question that had burned in my mind since I was a child. Rabbits and hares look similar, but they are very different animals.

But I was surprised that almost to a person, my friends found the “rabbit or hare” question absurd — just Frank being Frank. However, since I published this article back in 2012, it has been one of the most popular pages on this site of 8,000 pages.

Clearly: a lot of people had the same question.

And several years after this article was first published, a number of other people published similar articles. There’s even a video that deals with the issue, although in a roundabout way.

So let’s get to the question: is Warner Bros Cartoons’ most famous character a rabbit or a hare? The question must be answered!

Is a Bunny a Rabbit?

I know what you’re thinking: his name is Bugs Bunny, so he must be a rabbit. And yet, most of the cartoons have titles like Hare Brush and Fallin’ Hare and Bill of Hare.

What’s more, just look at the titles of the two films that people argue about being the first to feature Bugs Bunny: Porky’s Hare Hunt and A Wild Hare (both embedded above).

And the truth is that “bunny” is an ill-defined term. But not because it isn’t defined as (generally a young) rabbit. Rather, because most people lump rabbits and hares together.

So the situation is far from clear.

A Little Biology: Rabbit vs Hare

Before we get into this, I should tell you a little bit about rabbits and hares.

Despite the fact that they look quite similar, they are, in fact, not just different species, but different Genera.

In fact, rabbits (and I always kind of knew this because you just can’t trust rabbits) are in 8 different Genera.

This depends on the exact kind of rabbit. Most Americans will know the rabbits in the Sylvilagus Genus, which includes the cottontail rabbit.

Hares are all in one genus: Lepus.

Rabbits have 44 chromosomes, while hares have 48. So they really are fundamentally different.

So rabbits and hares are only in the same family: Leporidae. So they are as related as humans are to gorillas — very related, but far from being the same.

What’s In a Name?

Part of the problem is that five of the 32 types of hare are called jackrabbits. (Five different kinds of rabbits are called hares.)

This reminds me of all the confusion about the dormouse. The dormouse is not a mouse. In fact, they aren’t even the same Family; you have to go up to the Order (Rodentia), which they share.

When I was younger, I wondered why the jackrabbits I see everywhere here in Northern California seemed so different than domesticated rabbits. It is because they are only distantly related. And personally, I find hares much more interesting, even if I’m personally more like a rabbit. 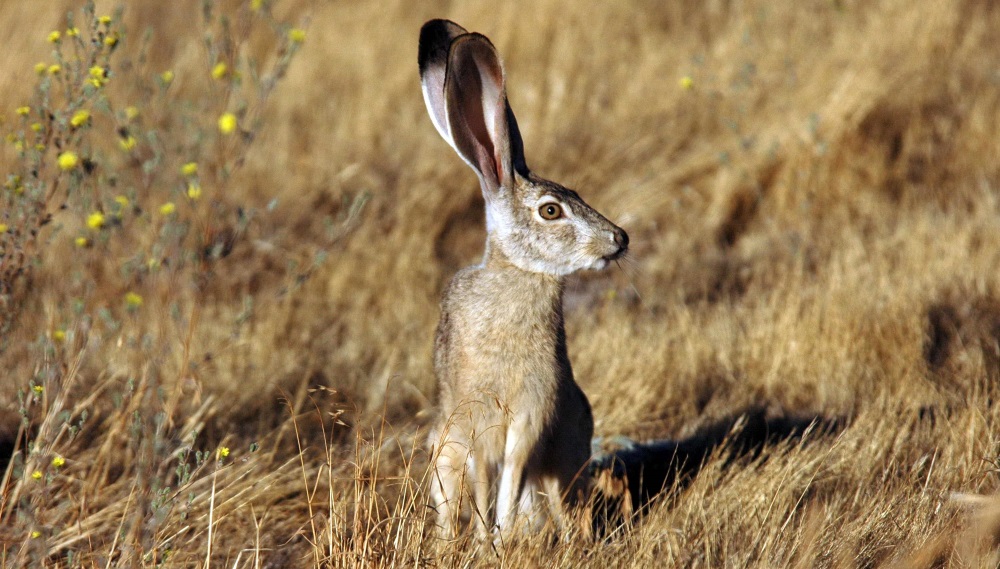 What Does This All Have to Do With Bugs Bunny?

Perhaps the most obvious difference between hares and rabbits is how they are born. Hares are born with hair (Ha!) and are fairly independent. Rabbits are born blind and hairless.

Unfortunately, his does us no good in our search for the truth about Bugs Bunny, because no film survives from his early days. But all hope is not lost.

Because of the fragility of young rabbits, they are forced to live underground in burrows. And Bugs Bunny lives in a hole. This almost seems like a smoking gun. See this Pete Puma cartoon:

We have seen that Bugs lives in a hole in many other episodes. This does suggest that Bugs is a rabbit. It is about the only thing that does, however. And The Flintstones live in houses, not caves. The hole seems clearly designed to give Bugs Bunny a sense of place, and in later episodes a sense of his being human-like (note that neither hares nor rabbits easily outwit humans).

Bugs is gray, and hares tend to be grayish. Bugs has long ears, and hares have longer ears. Bugs is fast, and hares are very fast (jackrabbits can run up to 40 miles per hour). Bugs is quick witted, and so are hares — they have to be given they live out in the open. But by far, the most compelling evidence that Bugs Bunny is a hare is that hares do not live in groups — they are loners.

The argument for Shorty is perhaps better. For one thing, he looks like a rabbit. And he doesn’t speak English like hares normally do.

Conclusion: Is Bugs Bunny a Hare or a Rabbit?

In the end, I suppose we shouldn’t depend upon cartoons for our biology education. Bugs seems to be both a rabbit and a hare. But the evidence points more toward him being a hare.

What is clear is that the crew at Merrie Melodies saw hares and rabbits as interchangeable. Given that Warner Bros Cartoons was based in Los Angeles, California, the main experience of the people working there was likely the jackrabbit — a hare that is called a rabbit.

Now all I have to do is get the scoop on that Trix “rabbit.”

Image of Bugs Bunny taken from Wikipedia and licensed under Fair Use. The wildlife images are both in the public domain via pxhere and PIXNIO.

22 thoughts on “Is Bugs Bunny a Rabbit or Hare?”