H-1B visas allow high tech companies to hire foreign workers when they just can’t find “qualified workers.” And I’ve been writing about this for a very long time, because it is a total scam. But in saying this, I don’t mean to put down the people who work under H-1B visas. I’ve worked with many of them and they are generally quite competent and I’ve considered a number of them friends. But H-1B visas are a scam for the high tech industry. They hurt high tech workers in America. And above all, they hurt the people working under them because they end up being limited kinds of slaves.

Michael Hiltzik wrote a great article over the weekend, Tech Industry’s Persistent Claim of Worker Shortage May Be Phony. He’s far to careful to come right out and say it, thus we get “may be” instead of “is.” Because there is no doubt. But I only say that because I’ve worked in the field and I’ve seen it firsthand. But it isn’t hard to understand. There are incentives in this situation. And it is a hell of a lot easier to push the government to allow a flood of high tech talent into the country than it is to raise wages.

You may remember the big conspiracy to keep down wages in Silicon Valley. It was headed by every idiot’s idea of an entrepreneur, Steve Jobs. He didn’t like that other companies like Google were stealing his employees. So rather than do what one would in an actual free market, he went to Google and other companies, and made a secret deal that they wouldn’t hire each other’s employees. Problem solved! But that shows you that high tech is no kind of bastion of liberality. Those guys are just as cut-throat and anti-competition as George Pullman.

Hiltzik highlighted a great example of just how disingenuous these people are:

Alice Tornquist, a Washington lobbyist for the high-tech firm Qualcomm, took the stage at a recent Qualcomm-underwritten conference to remind her audience that companies like hers face a dire shortage of university graduates in engineering. The urgent remedy she advocated was to raise the cap on visas for foreign-born engineers.

“Although our industry and other high-tech industries have grown exponentially,” Tornquist said, “our immigration system has failed to keep pace.” The nation’s outdated limits and “convoluted green-card process,” she said, had left firms like hers “hampered in hiring the talent that they need.”

What Tornquist didn’t mention was that Qualcomm may then have had more engineers than it needed: Only a few weeks after her June 2 talk, the San Diego company announced that it would cut its workforce, of whom two-thirds are engineers, by 15%, or nearly 5,000 people.

Even after this was pointed out, Qualcomm claims that it really does need those H-1B visas, because it “continues to have open positions in specific areas.” I have no doubt that is true. Because pretty much every business in the world has certain employees that they really, really want. For example, right now I would love to have access to a top quality researcher who I could pay a dollar an hour to. And that’s the thing with Qualcomm. Is it setting up programs to encourage people to go into these high demand areas? Of course not. It just wants to use it as an excuse — a way to keep wages down here at home. 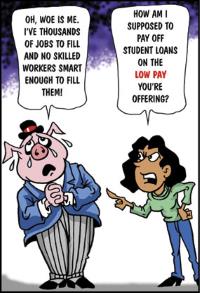 Hiltzik interviewed Michael Teitelbaum, author of, Falling Behind? Boom, Bust, and the Global Race for Scientific Talent. It argues that our need for STEM employees (science, technology, engineering, mathematics) is just a myth. And of course it is. When have businesses ever not complained that the workers were not good enough and that they were paid too much? Never. That’s why most rich people today earned their money off the back of the government.

Now the high tech industry is lobbying to more than double the number of H-1B visas — from 85,000 to 195,000. And it will probably get them. After all, there is no high tech union around that is going to lobby on the other side. Congress always talks about creating jobs, but here is an idea that will do something like destroy 100,000 jobs. That’s because the companies will replace existing jobs that clearly have Americans who can do them. But it isn’t hard to manipulate the law. But it will increase profits and income inequality. So hooray?