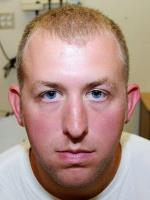 I continue to be amazed at what pussies police officers are. But no one seems to notice — most of all the officers themselves. Every time one of them — usually with other officers and armed with clubs, mace, tasers, and guns — shoots, tases, or otherwise brutalized an unarmed civilian, they show not the slightest embarrassment in explaining that they were afraid for their lives. And no media organizations are willing to call them on their public expressions of cowardice because they supposedly have such dangerous jobs.

It was thus not at all a shock that Darren Wilson testified in the no-prosecution grand jury that he was vewy vewy scared. This is my favorite line, “And when I grabbed him, the only way I can describe it is I felt like a 5-year-old holding onto Hulk Hogan.” Translation: “I’m used to the people I oppress being easy to manhandle!” Okay. Whatever. But if Wilson is going to admit that he couldn’t handle an unarmed 18-year-old and that he was justified in shooting Michael Brown six times, can we at least all admit quite publicly that Wilson is a pussy who can only manage confrontations with his club, mace, taser, and gun? Must we continue on with this fantasy that it is perfectly all right to totally blow confrontations like this and that it shows police officers like Darren Wilson are strong and capable?

I’ve also been impressed with the pictures of Wilson in the hospital. I’m not saying that I’m some tough guy, because I’m not. I take great pride in avoiding conflict and being a coward. Being brave is overrated. Brave people get killed. But Darren Wilson’s wounds just don’t look that bad to me. They look like the sort of things that can happen during a collision on the basketball court. That’s not to say that they aren’t serious. That’s not to say that I wouldn’t feel as though my life had been in danger if I had received such wounds. But we’ve already established: I’m a coward. All I want is a public admission that Darren Wilson is too. Of course, I’m not a bully who hides behind a badge, club, mace, taser, gun, and a whole department of other armed men — most of whom I assume are not pussies:

I don’t think all cowards are created equal, however. For example, I’m not sure that in the cold light of day, I would just make stuff up to save my skin. And I can’t say that Darren Wilson did that either. But I am very much in agreement with Ezra Klein, Officer Darren Wilson’s Story Is Unbelievable. Literally. The story seems made up — or at least coached. Wilson’s narrative includes “plot points” like this one that highlights the stolen cigars:

I was doing the, just scrambling, trying to get his arms out of my face and him from grabbing me and everything else. He turned to his… if he’s at my vehicle, he turned to his left and handed the first subject. He said, “here, take these.” He was holding a pack of — several packs of cigarillos which was just, what was stolen from the Market Store was several packs of cigarillos. He said, “here, hold these” and when he did that I grabbed his right arm trying just to control something at that point. Um, as I was holding it, and he came around, he came around with his arm extended, fist made, and went like that straight at my face with his… a full swing from his left hand.

Shorter, “He was beating me up; he stopped to flash the evidence of his crime; he continued beating me up.” It’s not credible.[1] And that’s especially true when you consider that he testified a month after the shooting — more than enough time to hone his testimony. Again, that doesn’t mean he is lying. When you are in the middle of a confrontation, you don’t necessarily process events carefully. That’s especially true if you are a coward. And after days and days of working with attorneys, one isn’t necessarily even aware of how “truth” is being manufactured.

So Michael Brown is dead. Darren Wilson faces no consequences. Now he will probably get a job for another police department. (I assume it would be difficult to integrate him back into the Ferguson Police Department.) And I suppose that we’ve decided that this is just fine. Pussies are welcome everywhere in law enforcement. Who needs bravery and manliness when you have clubs, mace, tasers, and guns? And tanks; don’t forget the tanks!

[1] According to Dorian Johnson, Michael Brown’s companion, the cigarillos were transferred to him in the middle of the fight. However, Brown does this because he’s trying to get free from Wilson who has him by the collar. That makes a whole lot more sense. Wilson isn’t in a position to do much more than pull on Brown. Brown was trying to extricate himself and could use another hand. The whole of Johnson’s testimony is far more credible. Wilson would have us believe that he was “officer friendly.” But we’ve seen what he is like in a general sense: a little man with a chip on his shoulder and a gun in his hand.