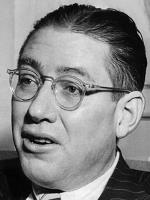 On this day in 1902, the great poet Ogden Nash was born. In general, poetry is hard on readers. It takes greater concentration than we are used to giving. But Nash found an audience quickly because he was so clever and funny. His poems often included made up word puns and unusual pronunciations. He also worked as a librettist for a couple of Broadway musicals.

His father had an import-export business, so the family moved around a lot. He was born in New York, but chose to live almost his whole adult life in Baltimore. Of this fact, he wrote, “I could have loved New York had I not loved Balti-more.” Other that this clever line, I can’t really understand choosing to live in Baltimore. But I guess that was just one of the things that made Nash special.

A girl who is bespectacled
She may not get her nectacled
But safety pins and bassinets
Await the girl who fassinets.

And here is his poem (part of a series about animals), “The Panther”:

The panther is like a leopard,
Except it hasn’t been peppered.
Should you behold a panther crouch,
Prepare to say Ouch.
Better yet, if called by a panther,
Don’t anther.

It’s all very playful and fun stuff—well worth spending some time with. And here is one of his songs, “Speak Low” with music by Kurt Weill: